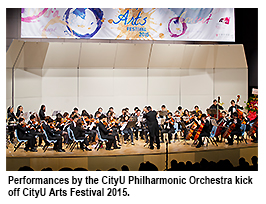 A concert of classical music by the Philharmonic Orchestra of City University of Hong Kong (CityU), a renowned Italian violinist, and a Taiwanese bassoonist commenced the CityU Arts Festival 2015 on campus. In the next few months, the festival will present an exciting programme of concerts, operas, an oil painting exhibition and a dance performance on the CityU campus.
Organised by the Cultural and Sports Committee, the CityU Arts Festival will feature performances by many of the University’s young performing artists, including the CityU Philharmonic Orchestra, CityU Choir, CityU Chinese Orchestra, CityU Concert Singers, and Students’ Union Dancing Society. Moreover, professional artists from Hong Kong, mainland China and overseas will join hands with CityU artists in performances to be held from October to December. 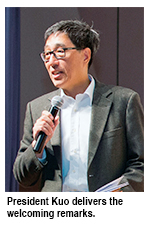 In his address at the opening ceremony on 14 October, CityU President Professor Way Kuo said the University was concerned not only with the pursuit of academic excellence, but also with arts and cultural development.
“We believe that culture can bring people together and that the arts add beauty and enjoyment to our lives. I would like to express my gratitude to all the artists for their contributions in this area,” Professor Kuo said.
The solemn academic hall of CityU was transformed into a vibrant performing venue on opening night. As Mr Chiu Kai-keung, Principal Conductor of the CityU Philharmonic Orchestra, began wielding his baton, the powerful rhythms and languid melody of Verdi’s overture to La Forza Del Destino deeply moved the audience. Established in 2000, the CityU Philharmonic Orchestra has performed in Austria and in 2011 joined with the orchestras of seven other local tertiary institutions in a concert to raise relief funds for the Japanese victims of the tsunami. 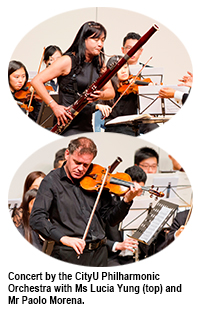 The CityU Philharmonic Orchestra joined with Italian trained Taiwanese bassoonist Ms Lucia Yung Tsang-shien to perform Mozart’s Bassoon Concerto in B flat major, K. 191 and  Bruch’s Violin Concerto No. 2 in D minor, Op. 44 with Italian violinist Mr Paolo Morena, filling the academic hall with the sweet music of the two European maestros.
Mr Morena, Concertmaster of the Orquesta Sinfonica de Tenerife, shared his performance experience with members of the CityU Philharmonic Orchestra in a violin masterclass before the opening ceremony of the Arts Festival.  “Even in the absence of a formal Performing Arts curriculum, CityU students bring their musical talents, passion and commitment to the university community to strive for excellence in this arena,” he said.
“The University has not only provided a beautiful venue and performance opportunities for its orchestra, but has also created an opportunity for its members to learn from and to play side-by-side with professional musicians,” he added.
Ms Yung, Principal Bassoon of the Macao Orchestra, commended members of the CityU Philharmonic Orchestra for their enthusiasm in rehearsals. “For young musicians, concert performances are a particularly valuable experience,” she said. “The concert organised by CityU will significantly benefit them.” 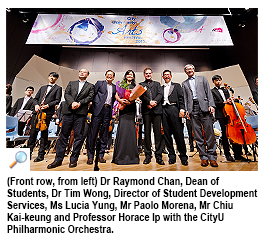 Professor Horace Ip Ho-shing, Vice-President (Student Affairs), and Ms Sarah Negro, Deputy Consul-General of Consulate General of Italy in Hong Kong and Macau, along with more than 200 other members of the audience enjoyed the sweet melodies in the concert.
Members of the CityU community and members of the public are welcome to attend the following CityU Arts Festival programmes:
For more details of the Arts Festival, please visit http://www.cityu.edu.hk/ctspc/.