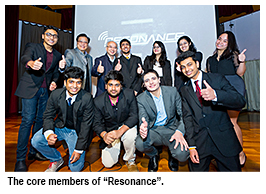 A project initiated by students from different backgrounds at City University of Hong Kong (CityU) has been selected by the University Grants Committee (UGC) as the best sector-wide student-initiated project for encouraging multi-cultural integration.
The activities organised for the project, titled “Resonance”, demonstrated CityU students’ innovative spirit and creativity, qualities emphasised in CityU’s unique Discovery-enriched Curriculum, as well as its focus on cosmopolitanism, explained Professor Arthur Ellis, Provost of CityU.
“CityU strives to promote internationalisation. We are committed to creating a caring and harmonious learning environment for students from all over the world,” said Professor Ellis.
He added: “The bottom-up approach reflected in this call to student teams for proposals has been an effective way of promoting cohesion among students. ‘Resonance’ has created on campus a strong force for inclusiveness, and we look forward to providing similar opportunities for project ideas from our students this coming year.” 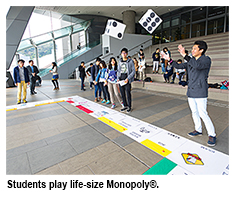 “Resonance” is the product of a UGC initiative that funded ideas driven by students for promoting multi-cultural integration and internationalisation. Local universities implemented projects/activities in the past academic year, and the UGC selected “Resonance” as the best.
About 220 local and non-local students in Hong Kong participated in the CityU project, of whom about 140 were participants and approximately 80 were organisers and volunteers. The CityU students behind the project comprised 15 students from Bangladesh, Hong Kong, India, Iraq and South Korea.
“Resonance” consisted of five events that took place simultaneously on 12 February 2015. The events, from planning to execution, were all driven by the students.
The events were:
Yusuf Rafique, the coordinator of “Resonance” and a student in the Department of Systems Engineering and Engineering Management, said events such as “Resonance” allowed students to showcase their talents and realise their potential.
“The participants not only competed against their peers to demonstrate how good they were, but also made lasting friendships and connections,” Yusuf said. 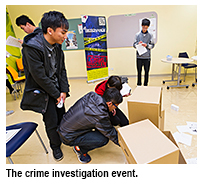 As the head of such a major project, the most important lesson Yusuf said he had learnt was the need for coordination and communication between different groups working together.
“I had to manage about six sub-committees, each consisting of local and non-local students,” he said. “Because we worked together for many months, we learnt to appreciate each other’s differences and perspectives. By the end of the project, all of us had strengthened those relationships and had become close friends.”
Sapkota Bibek, the team leader and a student from the Department of Architecture and Civil Engineering, said teams had worked together well, sharing knowledge about different gaming platforms.
“‘Resonance’ provided me with a valuable opportunity to meet new friends from various backgrounds, and enhance numerous skills that have contributed to my personal development,” Sapkota said.
The coordinators and team leaders thanked the Global Services Office for giving “Resonance” its constant support, and thanked Professor Michael Lam Hon-wah, Assistant Dean of the College of Science and Engineering (CSE), and other CSE staff members for mentoring the group