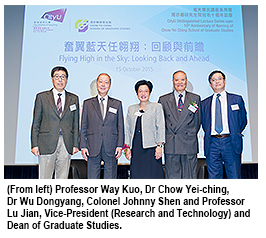 A former member of Black Cat Squadron and the vice-president of Boeing Research & Technology (China) delivered talks in celebration of the 10th anniversary of the naming of the Chow Yei Ching School of Graduate Studies (SGS) on 15 October.
Aviator Colonel Johnny Shen Chung-li and scientist Dr Wu Dongyang spoke on the theme “Flying High in the Sky: Looking Back and Ahead” at the City University Distinguished Lecture.
Colonel Shen shared a number of stories from his days working with the legendary Black Cats on the highly classified operation called “Project Razor”.
Now in his early 80s, he flew long-range U-2 surveillance aircraft over mainland China during the height of the Cold War. 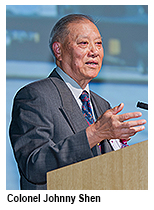 The secret missions were set up by the US and Taiwan in 1961.
“Training was tough,” he said. “The planes were difficult to fly. At 70,000 feet, a single error could be catastrophic.”
After months of physical, mental and operational training, Colonel Shen logged scores of flights between 1968 and 1973.
“Project Razor’ was discontinued in 1974 after relations between China and the US began to warm.
Colonel Shen, a Shanghainese and a graduate from the Air Force Academy, continued his aviation career as a test pilot and in the commercial aerospace industry.
In 2011, he met up with the pilot of a MiG-21 who had nearly downed Colonel Shen’s U-2 plane over Qingdao on one of the top-secret flights in the early 70s.
“We exchanged models of a U-2 and a MiG-21 when we met up in Beijing four years ago,” Colonel Shen said. “I thanked him for not shooting me down!”

In her talk, Dr Wu reviewed Boeing's history and shared its plans for product development as well as materials development for the aerospace industry.
A materials scientist by training, Dr Wu emphasised that the introduction of new materials in the construction of aviation technology had helped to reduce costs, improve efficiency, streamline production and reduce emissions.
“Innovation has been the key Boeing’s success,” said Dr Wu, whose responsibilities at Boeing include the development and implementation of a strategy and portfolio for Boeing R&T activities in China.
In particular, the use of new composite materials means that planes can fly longer on less fuel, which is win-win situation for customers, Boeing and the environment, she said. 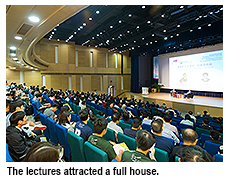 Planes today can be made with up to 50% composite material, which has helped reduce fuel consumption by 30%, noise by 60% and maintenance costs by 30% on Boeing planes, according to Dr Wu.
“Such innovation is why we are the most successful aerospace company in the world,” she said.
Professor Way Kuo, University President, kicked off the afternoon’s lectures by thanking Dr Chow Yei-ching for his generous donation in 2006 in support of graduate studies at CityU.
It transpired that, in addition to being a highly successful entrepreneur and chairman of the locally listed Chevalier Group, Dr Chow is in fact a qualified pilot, too.
The event was organised by the Office of the Vice-President (Research and Technology) and SGS.