​City University of Hong Kong (CityU) will confer the title of Honorary Fellow on two distinguished persons in recognition of their significant contributions to the development of, and service to, the University and the community.

On the recommendation of the Honorary Awards Committee of the Council, Dr Norman Leung Nai-pang, Pro-Chancellor of the University, has approved the conferment of the award of Honorary Fellow on Mr Chan Ka-kui, BBS, JP, and Mrs Rebecca Lai Ko Wing-yee, JP. 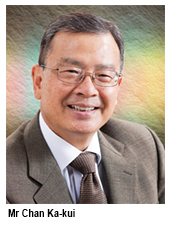 Mr Chan Ka-kui, Chairman of Mustard Seed Foundation, is a highly respected professional in the fields of construction and surveying. Having qualified as a quantity surveyor in 1974, Mr Chan spent most of his career with Hsin Chong Construction Group Limited. He was the Managing Director of the Company which is a very successful property and construction group in Hong Kong and Macau. Mr Chan was the Chairman of the Royal Institution of Chartered Surveyors (Hong Kong Board) in 1989, Vice-President of the Hong Kong Construction Association from 1989 to 1999, and Chairman of the Construction Industry Training Authority from 1993 to 2001. In addition to the surveying profession and construction industry, Mr Chan has wide experience in public service. He has served as Chairman of the Sir David Trench Fund Committee, and Vice-Chairman of the Occupational Safety and Health Council. He was appointed a Justice of the Peace in 1992 and awarded the Bronze Bauhinia Star in 1998 by the HKSAR Government. He also provided valuable support to the University by serving on the CityU Council and its committees from 2009 to 2014. He is currently a CityU Court member. 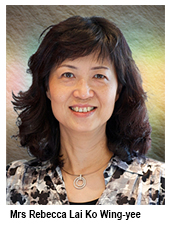 Mrs Rebecca Lai Ko Wing-yee has devoted herself to the civil service for 25 years and made considerable contributions to the development of society. She joined the Administrative Service in 1981 and has served in various bureaux and departments. She was Deputy Secretary for Financial Services from 1997 to 2000 and Commissioner for Tourism from 2000 to 2003.  From 2003 to 2006, she was Permanent Secretary for the Civil Service, responsible for the management and development of the civil service. After ending her career as a civil servant, she obtained a Master of Christian Studies (Counselling) at China Graduate School of Theology. Currently, she is the Registrar and Student Affairs Officer of this school, and a board member of the CEDAR Fund, a Christian relief and development organisation. A keen supporter of CityU, she served on the CityU Council from 2012 to 2014 and is a current member of the CityU Court. She was appointed Justice of the Peace by the HKSAR Government in 2007.

The two distinguished individuals will receive their fellowships at the Honorary Fellow Presentation Ceremony to be held in September 2015.