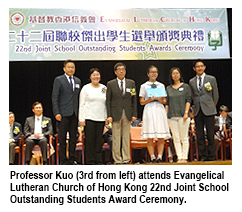 Discovery and innovation are vital to our lives, according to the President of City University of Hong Kong (CityU) who spoke at an awards ceremony and two graduation ceremonies in late May where he was handing out awards and graduation certificates.

“A degree is not as important as knowledge, and knowledge is less important than one’s own experience,” he said. “Failure can give birth to success. Drawing experience from failures, you can bring your potential to full play and score successes, and so contribute to society.”

Students from 10 primary and secondary schools under the Evangelical Lutheran Church of Hong Kong took part in the event. 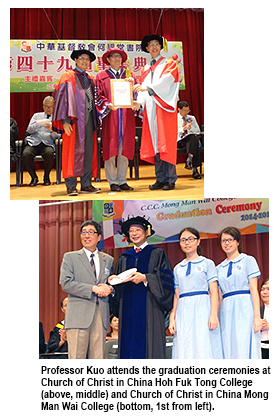 Citing the success story of a CityU graduate, Professor Kuo stressed the importance of discovery and innovation.

While still studying at CityU, he told the audience, that young man drew up a business proposal with his fellow students for a biological toxin-detecting reagent that had been developed by CityU researchers. The proposal won several awards for the successful commercialising of the new technology.

After his graduation, he and another CityU graduate started a biotechnology company and, with the said technology and other achievements, were recently awarded the Grand Prix at the 43rd Geneva International Exhibition of Inventions.

Bent on discovery, the graduate was able to find the potential value of applying the CityU technology commercially, Professor Kuo added. Then, eager to innovate, the company explored other biological toxin-detecting technologies, which led to the success in Geneva.

Professor Kuo also urged the graduating students at the two schools to emulate successful people, and never stop trying to achieve their own dreams.