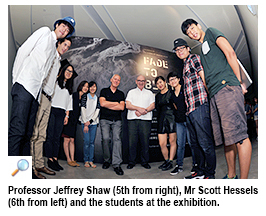 Fourteen spectacular artworks inspired by jungle caves in Vietnam will be presented at an exhibition titled “Fade to Black” at the Run Run Shaw Creative Media Centre at City University of Hong Kong (CityU) from 3 to 13 June.
The artworks were developed by 14 students from CityU’s School of Creative Media (SCM) who trekked through the Tu Lan cave system in the Vietnamese countryside from 22 February to 1 March.
They carried out a range of creative research while underground to collect the necessary raw materials. Once back in Hong Kong, they interpreted and presented their discoveries in the form of videos, interactive films, generative animations, dome-based movies, installations and projections, among other formats.
The themes behind the artworks include the contrast between the silence of nature and noise in the city; reflections on the impact of the Vietnam War; the conflict between development and preservation, art/nature and technologies, and natural and artificial development; a love of nature; pollution; culture and language; and isolation in a dense city.
The exhibition aims to foster a deeper conversation about finding a balance between developing sites for tourism and protecting the environment. The opening reception was held on 2 June. 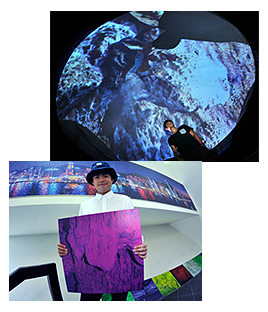 The Vietnam expedition, part of the Extreme Environments programme initiated by Mr Scott Hessels, Associate Professor of SCM, is a good fit with CityU’s Discovery-enriched Curriculum.
“It’s not just about these awesome existential situations that our students have the privilege to experience, but also about the science of our planetary heritage and the delicate balance of ecological and social forces that constitute the wondrous plenitude of life on earth,” said Professor Jeffrey Shaw, Dean of SCM.
“This science is to the visual arts what mathematics is to music; it is an underlying structure that informs the potential for aesthetic expression, an expression that in turn enhances and enriches our understanding of the (now threatened) equilibrium of forces that constitutes the fecundity of this planet,” he continued.
The students researched and created their work through arts-based field research, which was a groundbreaking idea in design education, according to Mr Hessels, the Executive Producer of the Extreme Environments programme.
“By using the tools of creative media to express their direct, personal experience on these trips, both the site and the artist-in-the-site are built into the message. The resulting artworks represent more than just nature but our relationship with it,” he added.
While underground, some students worked with scientific sensors to measure cave acoustics and echo, colour spectrums in beams of light, wind movement, water flows, stalactite formations and more. Others used media technologies to project images, light patterns and laser scans in the caverns. An assortment of cameras accompanied the expedition, from the latest digital models to old-fashioned black and white film, which is valuable in places with low light. 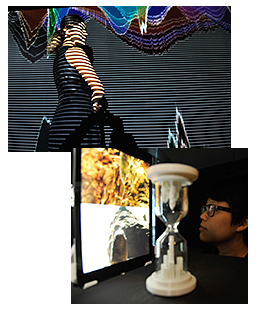 The end-products are exciting and original. For example, one student recorded loud bursts of sounds within the caves and then computationally analysed for reverberation. The patterns were then processed and visualised as generative animation to contrast the sounds of silence in overcrowded cityscapes in Hong Kong.
Another student measured colours in the light inside caves and represented them graphically in 3D. The interactive display increases in colour as more audience members approach the screen. The work conveys the message that pollution and human-induced influence is nearly undetectable; even artificial lighting has an environmental impact.
The trip was committed to protecting the natural sites selected for the expeditions—nothing was taken or left behind. Members of the British Cave Research Association who custom-designed the trip discovered many of the sites three years ago.
The CityU student team is the first group of artists and designers to see many of these amazing underground formations in Vietnam. CityU students have also trekked into the Mojave Desert and Antarctica in 2012 and last year as part of the Extreme Environments programme.
Please visit https://caves.scm.cityu.edu.hk for more information about the exhibition “Fade to Black”.