Artworks by six students from the School of Creative Media (SCM) at City University of Hong Kong (CityU) will be displayed on the largest urban screen in the world from now until 31 March.

The six exceptional pieces will be exhibited on the 77,000-square-metre facade of the International Commerce Centre (ICC). They were created by students on the Master of Fine Arts in Creative Media programme at CityU.

The aim is to open up new opportunities for emerging media artists and produce context specific artworks for display on the ICC, enabling the artists to contribute to Hong Kong’s public life and artistic culture. 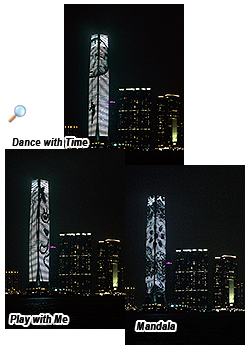 The CityU artists were trained how to produce artwork for gigantic displays and tutored on the impact of large-scale urban media production during their studies at SCM. Six works have been selected out of 18 produced by SCM students. All the works were previewed on the ICC tower last December, and the selected six pieces will be presented from 1 to 31 March.

Their artworks are titled Dance with Time, Play with Me, Mandala, The Hands, At Bay and Daily Life: Missing and Dream. They present an in-depth grasp of the busy, crowded, colourless and worry-laden life of the metropolis, and a wish that art could bring relief to people.

Professor Jeffrey Shaw, Dean of SCM said: “We are delighted that CityU students’ artworks can be displayed on the largest urban screen in the world. We hope the projects will not only enrich the urban environment of Hong Kong, but also push the boundaries of what is possible with large-screen urban display systems.”

Professor Maurice Benayoun of the SCM, the initiator and curator of the Open Sky Campus Project, said the artworks were filled with enthusiasm, creativity and profound meaning. “The students not only had to think of stories they wanted to tell in one to five minutes, but also consider the size of the screen, its impact on the immediate vicinity as well as its impression as a prominent landmark visible across the city.

“Not forgetting an artist’s responsibility to public space, we are proud that our students have put so much effort in to producing such amazing works,” he said.

Ms Cris Fung, General Manager (Retail Marketing and Customer Relations) of the Leasing Department at SHK, commended CityU’s School of Creative Media for nurturing artistic talent. “ICC collaborated with SCM to organise the ‘Open Sky Campus’ project, representing our direct support for the development of arts and culture. By this, we hope to encourage creative and talented students to innovate and transcend themselves, and create the best works for the public to enjoy.”

The general public is invited to view these innovative urban media artworks from along the promenade from Central to Wan Chai. The best views, with original sound, are available from the P3 and P4 public terraces at the IFC Mall.