A delegation from City University of Hong Kong (CityU) led by the University President, Professor Way Kuo, explored collaboration opportunities with prestigious universities and institution in France from 28 January to 2 February.

In the meeting with UPMC, which was the top-ranked French university by the 2014 Academic Ranking of World Universities, the delegation discussed with Professor Jean Chambaz, President of UPMC, the possibilities of stepping up faculty exchange in the areas of mathematics and other sciences, and enhancing student exchange programmes.

UPMC is one of six institutions that are joining together to form the new Sorbonne University. This comprehensive institution includes INSEAD Business School, which is consistently ranked by top business publications as one of the world's best business schools, and Paris-Sorbonne University, the top university for Arts and Humanities in France, according to the QS Ranking 2014.

After the meeting, Professor Kuo delivered a lecture on the reliability of nuclear and renewable energy resources at UPMC, which attracted many top scholars including Dr Jacques Lukasik, Secretary General of Euro-CASE, Professor Jean-Charles Pomerol, former President of UPMC, Professor Jean Salençon, President of the French Academy of Sciences, and Mr Yves Fanjas, Director of International Institute of Nuclear Energy.

Professor Kuo’s popular science book Critical Reflections on Nuclear and Renewable Energy has been translated into French and published in France recently. 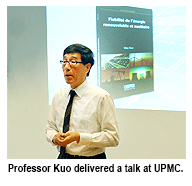 In addition, the delegation visited Bouygues Construction, a global player in construction with services active in 80 countries, to discuss the possibility of setting up collaborations on student projects and internship.

They also had discussions about research collaborations with Professor Yves Bréchet, Academician of French Academy of Sciences and High Commissioner for the French Alternative Energies and Atomic Energy Commission (CEA), a French national research centre.

The mission of the CEA is equivalent to that of the US Department of Energy. The CEA’s yearly budget amounts to 4.7 billion euros and it has a permanent staff of slightly under 16,000 people.

A CityU faculty exchange team will discuss exchanges with the universities in Paris and Strasbourg on the topic of social sciences, mathematics, chemistry, materials science, and others.