People in Hong Kong have recorded the lowest scores in a region-wide Happiness Index in all areas concerning quality of life, except for the economy, according to a new survey conducted by the College of Liberal Arts and Social Sciences (CLASS) at City University of Hong Kong (CityU). 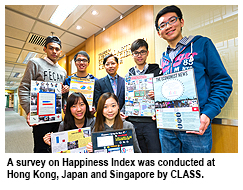 The results of the “2015 Happiness Index: Comparison between Hong Kong, Japan and Singapore” were revealed on 16 February at a press conference at CityU.
More than 1,100 citizens in Hong Kong, Japan (Osaka) and Singapore respectively were interviewed in January for the project, which was led by Professor Dennis Wong Sing-wing, Associate Dean of CLASS at CityU. A total of 3,468 questionnaires were collected.
The survey aimed to understand the personal feelings of the interviewees, including their attitude towards happiness (on a scale from 1 to 10) and their levels of satisfaction about life quality in six areas: politics and society; economy; environment; public health; leisure and entertainment; and housing.
The survey showed that Hong Kong people scored only 6.98 in the Happiness Index, whereas they scored 7.32 in a similar survey ten years ago.
Singapore had the highest overall score in the Happiness Index (7.56), closely followed by Japan (7.41) and Hong Kong (6.98).

While Singaporeans had the highest levels of satisfaction for life quality in five areas, residents in Osaka attained the highest score in leisure and entertainment. Respondents in Hong Kong had the lowest scores across the board except for a median score in economy.
The survey showed that Singaporeans were quite happy about their environment (with a score of 7.85), leisure and entertainment (7.62), public health (7.45), economy (7.40), housing (7.27) as well as politics and society (7.11). The average score for all six areas exceeded 7.
Professor Wong said the survey results reflected several positive aspects about Singapore. It has made strenuous efforts to greening the city—it is known as the Garden City; Singaporeans report positive feelings about leisure and entertainment and the different kinds of Southeast Asian cuisine available in the city; public health policies are favourably regarded; and most Singaporeans live in well-equipped public estates.
On the economic front, various relief measures introduced by the government in recent years have eased economic pressures. The city also has a strong tourism industry and Singapore enjoys a stable political status and its political leaders are highly regarded.
Japanese respondents in the survey were more satisfied in three areas: leisure and entertainment (with a score of 7.91), housing (6.60) and public health (6.35). 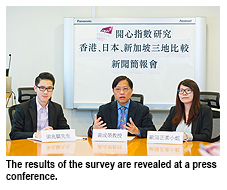 As for entertainment in the three places, Japan received the highest score. Professor Wong said it was because of the abundance of entertainment facilities in Osaka. In addition to famous theme parks, the streets bustle with shoppers and offer a variety of activities. In terms of accommodation, property prices have fallen in recent years because of Japan’s economic downturn, and are now more affordable.
Osaka residents are generally satisfied with their health and welfare system, thanks in large part to the high level of state responsiveness. The government continues to improve welfare benefits for children, people with disabilities, senior citizens and people on low incomes or suffering long-term illnesses.
Despite challenges brought on by natural disasters, and on-going internal economic issues, the happiness index score for Osaka residents (7.41) is similar to that recorded by Singaporeans.
In contrast, Hong Kong people are very dissatisfied with the quality of life in all six categories. Compared with Singapore and Japan, apart from a relatively high index score of 6.70 for entertainment, Hong Kong scored low in the other five categories: 5.88 on medical care and health, 5.66 on economy, 4.90 on environment, 4.41 on politics and society, 4.22 on accommodation; with the last three categories scoring less than 5.
On the plus side for Hong Kong, scores for the economy were relatively strong probably because underlying economic indicators remained stable.
According to Professor Wong, it was understandable that Hong Kong people were more satisfied with entertainment than with the other categories. Although it is a small city, Hong Kong has its fair share of theme parks, it is a popular tourist hotspot and it is the world’s third largest producer of films. In other aspects, though, the recent debate on universal suffrage and political reform has polarised society, and opposition to the authorities has become more prominent.
In addition, the shortage of public housing and rocketing property prices and rents have turned Hong Kong people into “property slaves”, causing widespread dissatisfaction, Professor Wong said.
The study also found that the happiness index among women in the three places is higher than that among men, on average. The reason might be because, traditionally, men suppress feelings for cultural reasons while women have more channels to express themselves. As men are often the main source of financial support within a household, women tend to experience less work-related stress, and hence they are generally happier.
In terms of age differences, younger people (under 24 years old) and senior citizens (65 years or above) in the three places are happier than people between the ages of 25 and 64. Young people in typical families are mostly at school, with their parents taking care of them, and have access to help from their families or teachers when they encounter difficulties. They have less economic and work-related stress. Older people also face less work and family stress, and many of them have retired, which is why they might be happier.
Adults on the other hand experience stress for economic, family, career and interpersonal relationship reasons. Many have parents and children to take care of, which might be why they appear less happy.