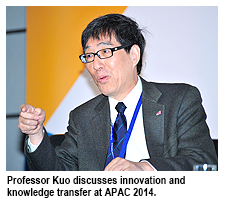 The President of City University of Hong Kong joined local and international university heads to discuss how to leverage knowledge transfer for institutional advancement at the presidents’ forum which kicked off the APAC Innovation Summit 2014 on 1 December.
In a wide-ranging discussion with other panelists, Professor Way Kuo made several key points about the state of knowledge transfer and the promoting of innovation in Hong Kong with comparative references to the US, Taiwan and Japan.
He queried why the cream of Hong Kong talent tended to go overseas to pursue genuinely innovative projects in science and engineering, while at the same time the top students graduating from local secondary schools were not opting to study science nor engineering.
“Hong Kong needs to commit to a greater leadership in and promotion of knowledge transfer and innovation,” Professor Kuo said. “We need clearer government policy.” 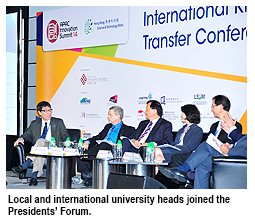 During the discussion, other panelists raised issues related to local culture and risk taking as possible explanations for Hong Kong’s generally perceived lack of development in innovations in science and engineering.
Earlier in his opening address Dr Richard Armour, Secretary-General of the University Grants Committee, had thanked Professor Kuo for lending him his book which concerns the integration of teaching and research a few months ago, saying he was now more convinced that it was vital for higher education to see more teachers doing research, and more researchers teaching in higher education. The book is Clarifying Some Myths of Teaching and Research published by National Tsing Hua University Press.