Over 350 student athletes from 32 sports teams attended the Annual CityU Sports Team Welcoming Party on 18 October. This annual activity also marks the commencement of the new inter-varsity sports competition season. CityU Sports Teams demonstrated their creativity, teamwork and artistic flair in the “Sports Team Displayed Board” and “Team Performance” contests under the theme “U Raise Me Up, to More Than I Can Be”.

Professor Horace Ip Ho-shing, Vice-President (Student Affairs), started the party by welcoming the new team members and thanking all the team members, coaches, trainers and team managers for their dedicated efforts and contribution to the outstanding achievements of the CityU Sports Teams in the past years. 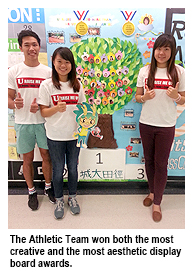 Professor Ip said he hoped the sports teams would continue to shine and that CityU would win a 9th or even 10th Grand Slam if the athletes can uphold their fighting spirit and good teamwork.

The Athletic Team emerged as the big winner in the display board contest, winning both “The Most Creative Team Board” and “The Most Aesthetic Team Board” awards. All the Sports Teams had also impressed the judges by showcasing their creative acts in dance, drama, singing, sports demonstration, and video presentation. The Men’s Handball Team won “The Best Team” award for gaining the highest score in the contest.

The Welcoming Party reached its climactic end when all 350 participants chanted the team slogan “Be The Best That We Can Be” and sang the finale song “You Raise Me Up” led by Mr Roy Ngai Hoi-yee, Head Coach, and the Sports Team Council Members who assisted in making the event a great success.