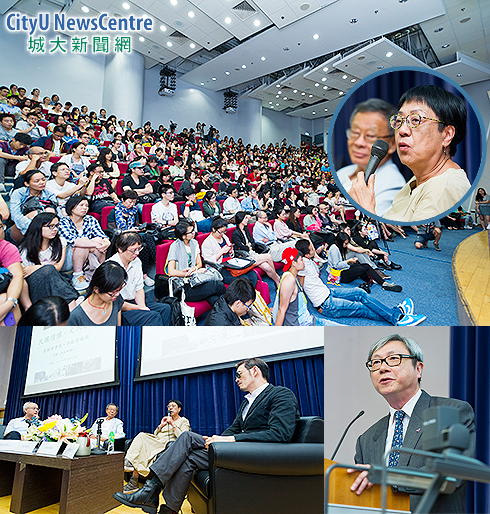 To commence the first talk in the CityU Humanity Special Series in celebration of City University of Hong Kong’s (CityU) 30th anniversary, filmmaker Dr Ann Hui On-wah and Professor Leo Lee Ou-fan, Professor Emeritus at Harvard University, discussed the major themes and cultural background related to the early years of the Republic of China through Dr Hui’s new movie The Golden Era. A film about the making of The Golden Era was screened before the talk.
Dr Hui’s new film depicts this particular period in China’s history through the life of Xiao Hong, a prominent female writer in the days of the Republic of China. Dr Hui, who has taught at CityU’s School of Creative Media, and Professor Lee reflected on this period, in which people longed for love and pursued dreams, but in reality they met with frustration and disappointment.
The talk, which was held on 19 September, was part of CityU’s 30th anniversary student programmes. Professor Horace Ip Ho-shing, Vice-President (Student Affairs), delivered a welcome speech before the talk, which was attended by over 500 students and guests.
Dr Ma Ka-fai, Assistant Professor in the Department of Chinese and History, and Dr Raymond Chan Kwok-hong, Dean of Students, hosted the speakers’ sharing session and drew an enthusiastic response from participants. Among the attendees were Professor Paul Lam Kwan-sing, Chief-of-Staff, and Dr Wong Chi-tim, Director of Student Development Services.
The next talk in this series will be delivered by Mr Anthony Wong Yiu-ming, a prominent artist, and Dr Petula Ho Sik-ying from the University of Hong Kong on 14 November. The topic will be “Restless love in Hong Kong”.