CityU lights up the city 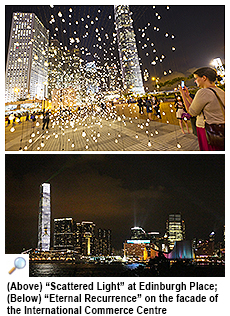 The spectacular new media artworks showcased on the facade of the International Commerce Centre, the highest skyscraper in Hong Kong, and at the Edinburgh Place in Central are parts of the large scale media arts exhibitions with the theme “Fleeting Light” organised by City University of Hong Kong (CityU).
The featured artists are Mr Jim Campbell, a world renowned media artist, and two leading local media artists, Dr Samson Young Kar-fai, Assistant Professor of CityU’s School of Creative Media (SCM), and Dr Leung Mee-ping, Assistant Professor of the Academy of Visual Arts at Hong Kong Baptist University.
The exhibitions are being co-presented by the Hong Kong Arts Development Council (HKADC) in association with the Art Promotion Office, the Leisure and Cultural Services Department.
Several VIPs officiated at the launching ceremony, which was held at the Hong Kong Convention and Exhibition Centre on 10 September. They were:
·        Ms Florence Hui Hiu-fai, Under Secretary for Home Affairs
·        Professor Jeffrey Shaw, Dean of SCM
·        Professor Maurice Benayoun, Professor of SCM
·        Dr Wilfred Wong Ying-wai, Chairman of HKADC
·        Ms Ellen Pau, Chairman of Film and Media Arts Group in HKADC 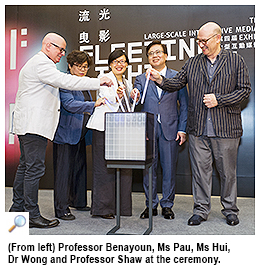 Hong Kong was undoubtedly the world’s great media art capital, Professor Shaw said at the ceremony.
“This is because Hong Kong has so many great media artists and grassroots media art initiatives. The Hong Kong government is giving media art unstinting support, as exemplified in this exhibition,” he said.
“The SCM, its students and faculty have also played an important role in the ecology of media art in Hong Kong. We are very proud of that. It is also our hope that the ‘Fleeting Light’ will be our beacon in the urban memory of Hong Kong, inspiring the future directions of media art in this city,” he added.
Professor Shaw and Professor Benayoun are the curators of the exhibitions. 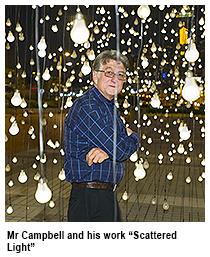 After the lighting ceremony, attention shifted to the Kowloon side of the harbour to witness the launch of Mr Campbell’s “Eternal Recurrence” on the facade of the International Commerce Centre.
This commissioned work, the biggest in terms of size that the artist has ever created, left the audience stunned as they watched shadows of people swimming up and down the external wall of Hong Kong’s tallest building.
Mr Campbell has also installed his work “Scattered Light” at the Edinburgh Place in Central. The installation is a structure of 2,000 light bulbs in an apparently random matrix which reveals, on closer inspection, the shadows of people moving in and out of the light-bulb maze. 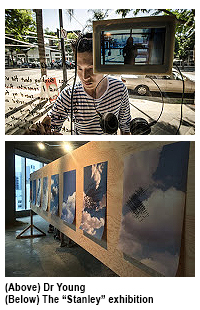 To re-visit the artist’s many other creations, the retrospective exhibition “LIGHT MATTER The Jim Campbell Experience 1990-2014” will be held from 12 September at CityU’s Run Run Shaw Creative Media Centre as part of the “Fleeting Light” showcase.
“Fleeting Light” also features Dr Young’s “Stanley” which recreates a forgotten chapter in Hong Kong’s history. From a digital image of “Day Joyce Sheet”, an embroidered artefact from the Stanley Internment Camp during World War II, Dr Young extracts the famed signatures of camp internees from the sheet and superimposes them on photos of sunny skies.
He also creates sound installations with archival recordings of interviews with internees, striking a huge contrast between the dark history of the camps and the bright artificial sunlight within the exhibition. 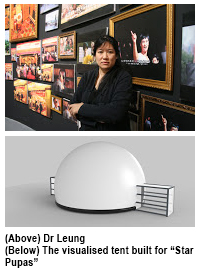 Dr Leung’s “Star Pupas” recreates in a tent the starlight that is often absent from Hong Kong’s skies because of light pollution. Visitors can “name” stars with a special mobile app. The inside of the tent grows brighter as more participants using the app. Visitors can even share the starlight and what they think and feel at the moment of “naming” the stars through the app, lighting up others’ lives with love and care.
Details of the exhibitions are available on www.fleetinglight.hk.