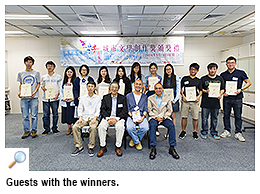 Students from City University of Hong Kong (CityU) took home a clutch of prizes at the 9th City Literary Awards.
There was one outright winner, a 1st runner-up, a 2nd runner-up and merit award from among the CityU entries.
The theme for this year’s competition, which received 470 entries from Macau and Hong Kong in four different categories, was “City Living”.
Professor Cheng Pei-kai, Visiting Professor at CityU’s Chinese Civilisation Centre, said at the presentation ceremony held earlier that many awardees had achieved excellence in writing over the years, and some had eventually become professional writers.
He suggested that secondary schools and universities worked harder to promote literary writing because it could help young people develop independent thinking, express care for themselves, other people and society, and reveal the human spirit. 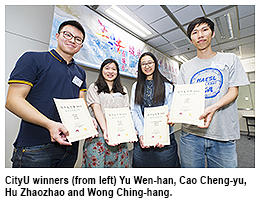 One of the aims of the competition is to inspire young people living in Hong Kong and Macau to convey their experiences, feelings, emotions and thoughts in literary form.
The winner in the Short Story category was Wong Ching-hang from CityU’s Department of Chinese, Translation and Linguistics. Cao Cheng-yu, a student in the Department of Systems Engineering and Engineering Management won 1st runner-up in the Prose category. Yu Wen-han, a postgraduate student in the Department of Chinese, Translation and Linguistics, and Hu Zhaozhao, a postgraduate student in Arts in Media Culture, won the 2nd runner-up prize in the Poetry category and a merit award in Art and Cultural Criticism, respectively.
The overall competition winners were:
The City Literary Award has received generous support from prominent writers, poets and literary scholars. They were Professor Huang Ziping, Professor Chen Zishan, Mr Liu Wai-tong, Mr Li Rui, Ms Lily Hsueh, Mr Yan Lianke, Professor Bei Dao, Mr Yip Fai, Professor Cheng Chou-yu, Mr Perry Lam, Professor Xu Zidong, and Professor Ji Jin. 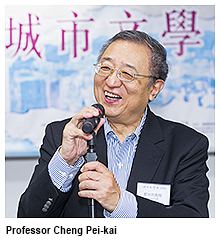 The City Literary Award is one of the major events at the annual City Literary Festival. Both are organised by CityU’s Cultural and Sports Committee, the Chinese Civilisation Centre, and the Department of Chinese, Translation and Linguistics; and are jointly organised by the Hong Kong Arts Development Council, the Chinese Language Education Section of the Curriculum Development Institute at the Education Bureau, and Macao Foundation.
The event was co-organised by the Putonghua Channel of Radio Television of Hong Kong, Ming Pao Monthly, and Commercial Press Limited.
The full list of prize winners can be found here.