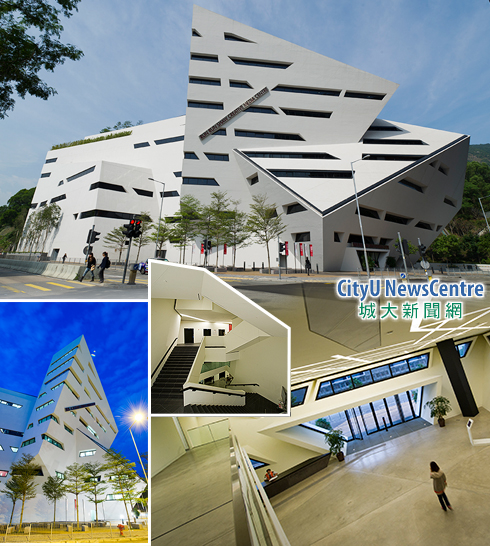 The Run Run Shaw Creative Media Centre (CMC) at City University of Hong Kong (CityU) has been selected as one of the 10 most spectacular university buildings in the world.
The survey was conducted by Emporis, a Hamburg-based architectural data company which manages a worldwide database on construction data and commercial real estate information.
Designed and built by the world famous architect Mr Daniel Libeskind, the CMC is a unique building in which the unexpected is created by bold simple and spatial forms.
It is a crisscross of the horizontal and vertical and the form of the building ascends obliquely, capturing the creative spirit and intensity of Hong Kong, according to Mr Libeskind.
The CMC is home to the School of Creative Media, Department of Computer Science, Department of English, Department of Media and Communication, and the Centre for Applied Computing and Interactive Media.
Other spectacular university buildings on the list include Lomonosov Moscow State University, Swanston Academic Building in Australia and Bradfield Hall at Cornell University in the US.