The term “bitcoin” sweeping around the Chinese world was the most popular new word used by the media in the Pan-Chinese region, while “Occupy Central” was the hottest new word in Hong Kong, according to the 2013 LIVAC Pan-Chinese New Word Rosters released by City University of Hong Kong (CityU) on 13 February.

The new Chinese words in the 2013 Rosters come from a wide spectrum of domains including politics, economics, science and daily life. As in previous years, some new words for 2013 signify a new cultural phenomenon.

Professor Benjamin T’sou Ka-yin, Emeritus Professor of Linguistics and Asian Languages of the Department of Chinese, Translation and Linguistics, said hot topics in Hong Kong and the Pan-Chinese region were reflected in the most common new words.

“The new words relating to daily life and social perspectives have increased significantly, but there have been relatively fewer new words about politics. This reflects that daily life is of greater concern for the media and the public, and demonstrates the fact that the words derive from daily events,” he said.

The bitcoin was once regarded as the most prominent new currency in the future, and the medium of exchange would no longer rely on gold and the US dollar.

In addition, the term “room sister” originating in Shaanxi Province reflects the hatred towards the corrupt officials and common concerns about the unfair distribution of resources in Chinese societies, while “rustic gold” is an old word used in new ways, with negative undertones, that reflects the serious social disparity between the rich and the poor.

The “giant duck” created by a Dutch artist has drawn extensive cross-straits attention, reflecting people’s reminiscence of childhood innocence with past/present contrast. The Chang’e 3 spacecraft and the moon rover Jade Rabbit which successfully landed on the moon have made the Chinese proud, too.

Some Chinese new words that have not quite entered the top five are still noteworthy because they were hot topics in the media, including Xi Jinping’s idea of the “China dream”, “eavesdropping gate” caused by Edward Snowden, the amazing shopping spree by “China mom” in the West, and the newly established “Air Defense Identification Zone” in mainland China. 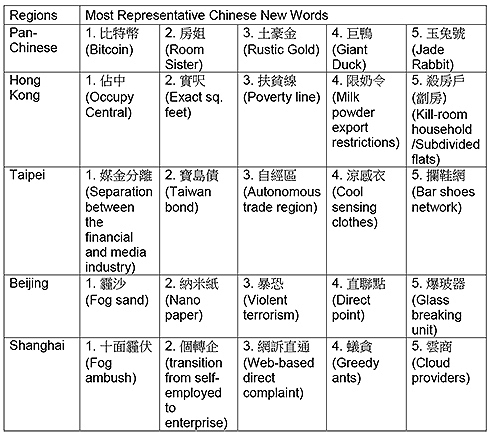 Political and social issues were the focus in Hong Kong in 2013. “Occupy Central” reflects an immense social disparity and polarisation. The Hong Kong government requires the differentiation between saleable area and construction floor area when buying and selling flats, leading to the implementation of the term “exact sq. feet” in Hong Kong property. The first ever formulated “Poverty Line” has significant implications for affluent Hong Kong. The policy of “kill-room household”, which has a direct influence on the livelihood of the grassroots, as well as the “milk powder export restrictions” have caused huge controversy between Hong Kong and mainland China.

The Taipei media has paid a lot of attention to the economy in 2013. The “separation between the financial and media industry” is a new policy in Taipei. The release of RMB bond in Taipei, which has significant political implications, generated the new word “Taiwan bond”. The emergence of “cool sensing clothes” and “bar shoes network” has been a topic of discussion among the general public in Taipei. The founding of the Tang Prizes, despite marking an important milestone in the public recognition of Chinese culture, has not captured enough attention of the media to enter any of the top Rosters.

The public in Beijing has coined the new word “fog sand” for the serious pollution problems in recent years in the city. The violent terrorist activities termed “violent terrorism” in the Xingjiang region have alarmed the mainland government. Various new technological products including “nano paper”, “direct point” and “glass breaking unit” have emerged in usage in daily life of the general public in Beijing.

As in the previous year, new words in Shanghai under the media’s spotlight are concentrated on the daily lives of the general public, including “fog ambush”, an irony of the serious pollution problem in the city; “greedy ants”, a “bits-by-bits” type of corruption; and “web-based direct complaint”, a well-received web-based complaining channel, and “cloud providers”, a new and open business platform which has created a new business ecology in Shanghai.

Unlike popular words on the internet, the LIVAC New Word Rosters are based on the LIVAC (Linguistic Variations in Chinese Speech Communities) database which systematically processes, screens and analyses the words used by the press in the Pan-Chinese region including Beijing, Hong Kong, Shanghai and Taipei, as well as in various Chinese print media. Since 1993, the database has analysed over 550 million words from the major press in the Pan-Chinese region and has accumulated over 1.6 million words in the LIVAC dictionary.