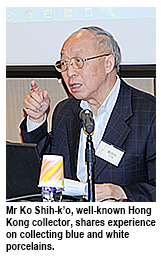 People say that even if you include collections from public institutions from all over the world, the collection of blue and white porcelain from the Yuan dynasty that is held by the Tianminlou Foundation probably ranks third, following collections in the Topkapi Palace Museum in Istanbul and the Ardebil Shrine in Iran.

Mr Ko Shih-k'o, the man behind the Foundation, is also a generous exhibiter. The blue and white porcelain he and his family have collected are not locked away in safes or hidden in basement closets. Rather, they are displayed in his home, open to experts and scholars both at home and abroad. His porcelain items are regularly exhibited in Hong Kong, Shanghai and Taipei, and were once loaned to the Shanghai Museum.

He is always willing to share his collection with experts, scholars and collectors in the same sphere, attend academic symposiums, explore ancient kiln sites by scaling hills and crawling into caves, advise on antique porcelain, and give talks on the topic. 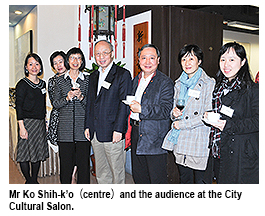 On 27 November, Mr Ko shared tales about his collection from the Yuan, Ming and Qing dynasties at a City Cultural Salon at City University of Hong Kong (CityU) with around 30 invited guests who share an interest in cultural and historical relics.

In his talk, Mr Ko recalled that while his exposure to the collection of ceramics came late in his life, luck has invariably favoured him. In 1954, he was living in Luoyang, Henan province, an ancient capital in China. When the Luoyang Tractor Plant was set up there, a number of ancient tombs were discovered on the construction site. Some of the sites were near his home. Later, he moved to Nanjing, another city with a long history, where his place of work happened to be close to the Ming Ancient Palace, where many ceramics had been unearthed by builders.

When he came to Hong Kong in 1982 in his fifties, he found a large quantity of pottery and porcelain from the Yuan, Ming and Qing dynasties in his father’s home. His father, Mr Ko Shih-cao, began to collect ancient porcelain in the 1950s. Helping his father to prepare for an exhibition sparked a deep interest in him for collecting ancient porcelain, too. His knowledge has been enhanced through extensive reading and research.

Mr Ko revealed how his father appreciated that the Asian Studies Institute at Oxford University has cultivated a large number of talented connoisseurs of porcelain over the years. Before he died, he made it clear that he didn’t want his porcelain collection to be locked away or auctioned off. Instead, it should be made accessible to all, which is how the foundation came into being. 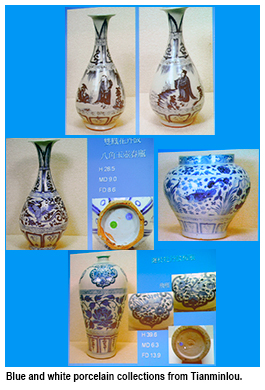 A German youth wrote a book about China after two years of studies as an overseas student. Later on, he got assigned to work in China for a longer stay. But the comparative long stay in China, strange to say, only rendered him less able to write another book about China. He only managed to have some terse essays published in newspapers and periodicals. But it got worse when he finally settled down in China with a family. Twenty years of living in China had furnished him with thorough knowledge about China, but rendered him unable to write even brief essays about China.

“I find myself in a similar situation,” Mr Ko said. “Seven years after I was exposed to the collection of blue and white porcelain, I was emboldened to write a monograph, Chinese Porcelain: The S.C. Ko Tianminlou Collection, which is still available today. However, as a veteran in this field, I have a mounting suspicion about many hazy points, and I am too intimidated to air my views in print.”

Mr Ko went on to explain that there are four commonly acknowledged ways to determine the age of certain porcelain products, namely reliable historical data, the archaeological sites, the kiln sites and porcelain wares from unearthed graves. As long as we have reliable evidence of one or two of the above, we could be fairly comfortable to tell the exact years, he said.

When asked how his collections would be disposed of in the future, Mr Ko remarked that private collectors should have an expansive mind, viewing their collections as a form of cultural enjoyment rather than a financial investment, for investments and collections are two entirely different matters. 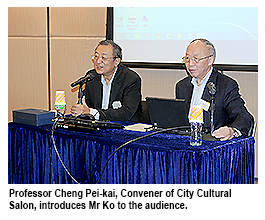