What causes autoimmune and allergic diseases? 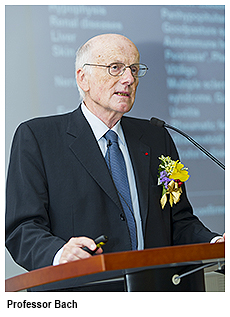 Are we too hygienic? One of France’s most distinguished scientists raised this issue at the latest in a series of talks titled the France–Hong Kong Distinguished Lecture Series on 6 November at City University of Hong Kong (CityU).
Professor Jean-François Bach argued in his lecture on the causes of autoimmune and allergic diseases that there was now reasonably strong evidence of a causal relationship between the decline of infectious diseases in industrialised countries and the increase in immunological disorders, such as type 1 diabetes and multiple sclerosis, for instance.
In addition to explicating this “hygiene hypothesis” – that the decreasing incidence of infections in Western countries and more recently in developing countries is the origin of the increasing incidence of both autoimmune and allergic diseases – Professor Bach also suggested that microbiota in the gut can influence a person’s disposition towards the development of certain autoimmune and allergic diseases.
He began his talk by pointing out that the number of people around the world developing autoimmune and allergic conditions, for example multiple sclerosis or asthma, has increased dramatically over the last thirty years, especially in so-called developed nations.
“Genetics certainly plays a role in explaining a person’s sensitivity to developing such diseases, but environmental factors are important, too,” said Professor Bach, who is Permanent Secretary of the French Academy of Sciences, Member of the French National Academy of Medicine, and Member of the British Academy of Medical Sciences.
On the one hand, studies of identical twins reveal an increased likelihood that both siblings may develop certain autoimmune diseases and allergies as they grow up. 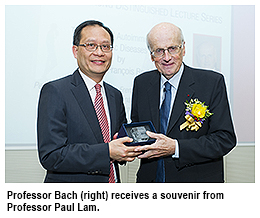 On the other hand, studies of migrants from South Asia to the UK indicate environmental factors at work. Research has shown that such migrants appeared to have some protection against certain autoimmune diseases and allergies when they first arrived in the UK, but their children, or children’s children, seemed to lose that immunity over the years, suggesting environmental factors were at work, Professor Bach said.
Data produced from the emerging field of genomics has further emphasised the complexity of the causes of autoimmune and allergic diseases. It is now clear that certain genes that might cause some of the diseases in question overlap with other diseases. That is, the genes that appear to play a role in a person’s development of irritable bowel syndrome, for example, might well be strongly linked to another condition, too. As a result, scientists are faced with a complicated web of genetically linked diseases.
But what is becoming increasingly apparent, he added, is that microbiota in the gut, formally referred to as flora in the gut, maintains a highly complex relationship with genes and the environment, and scientists are only just beginning to understand how this network of genes, the environment and bacteria interacts.
Professor Bach suggested that one way of beginning to tackle the problem was to incite levels of tolerance in the human immune system rather than insist that patients have to endure immunosuppressant treatment, an approach that some doctors in recent years have favoured for dealing with autoimmune diseases such as ulcerative colitis, for example.
Our understanding of the situation is further compounded by the fact that some people get sick and others stay healthy even when exposed to very similar circumstances, Professor Bach said. “So we have to find therapies that can help all of us move forward, and enhancing our levels of tolerance is one approach we can consider.”
Another possibility, he argued, was to look carefully at other therapies, in particular through the lens of the so-called hygiene hypothesis, which suggests that viruses that cause diseases in humans might also offer levels of protection later in life against pathogens, rather like the way vaccinations offer protection.
According to the hypothesis, if children are not exposed to infectious agents and parasites as they are growing up, they will be more susceptible to allergic diseases later in life because their immune system has not developed naturally.
“What we can do is perhaps to find therapies that mimic the way infections help us, and use synthetic materials which will stimulate receptors in a way that mimics how infections affected a person, but without the harmful effect of the actual infection,” Professor Bach said.
During his welcoming remarks, Professor Paul Lam Kwan-sing, Acting President, praised the France–Hong Kong Distinguished Lecture Series for enhancing the intellectual ambience at CityU.
In her speech at the start of the event, Ms Lilas Bernheim, Deputy Consul General of the Consulate General of France in Hong Kong and Macau, thanked Professor Philippe Ciarlet, CityU’s University Distinguished Professor, for his continued efforts in promoting the lecture series, which he initiated in 2005.