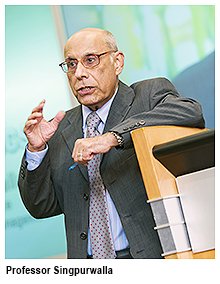 An appreciation of the philosophical and mathematical underpinnings of quantifying uncertainty is crucial for all the sciences, according to one of the foremost academics working at City University of Hong Kong (CityU).

Professor Nozer Singpurwalla, Chair Professor of Risk Analysis and Management in the Department of Systems Engineering and Engineering Management and Department of Management Sciences, was speaking at the latest in the President’s Lecture Series: Excellence in Academia on 4 November, a talk that was postponed from September due to severe weather caused by Typhoon Usagi.
Despite the intellectually challenging content of his talk, Professor Singpurwalla was enthusiastically received by the diverse audience, especially for the highly interactive quiz on a topic that fascinated many. 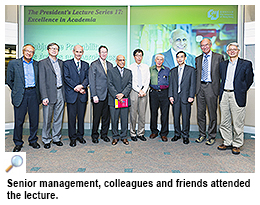 His talk, titled “A Conversational Overview of Subjective Probability: its Meaning, Content, Axioms, and Acrobatics”, was organised into five sections in which he explored rhetoric on the interpretations of probability; a critique of the frequency and classical interpretations; subjective probability and its operationalisation; the theory of subjective probability: its axioms; and violations of axioms and paradoxes.
To get started, Professor Singpurwalla said the word “probability” and its synonyms “likelihood”, “chance”, and “prevision” appear in the empirical sciences, mathematics, business, philosophy, and everyday situations like weather forecasting, reliability, safety, and risk.
“Because of its use in a variety of contexts, the word [probability] has acquired several shades of meaning, some not clearly distinguishable from each other,” said Professor Singpurwalla, who is also Distinguished Research Professor at The George Washington University, and Fellow of the American Statistical Association, The Institute of Mathematical Statistics, and The American Association for the Advancement of Sciences.
After outlining the historical approaches to understanding probability, such as empirical, logical and subjective notions, plus intuitive probability and propensity, he offered a critique of the frequency theory that, for example, the probability that a particular coin will fall heads when tossed is ½, suggesting this notion is problematic because it is impossible to produce a balanced coin to be tossed, which impacts the overall probability of which side a coin will fall – heads or tails.
This argument led the speaker into a discussion of subjective probability that suggests probability is essentially based on a person’s own verdict as to whether some phenomenon is likely to occur, adding that according to the intuitive thesis in probability, probability derives directly from intuition.
Professor Singpurwalla went on to talk about the theory of subjective probability, conditional subjective probability and violations of related axioms.
Perhaps one of the most telling of the several quotes from various giants in the field of statistics, reliability and risk analysis presented at the talk by Professor Singpurwalla was that “probability is like time; we know what it is until we are asked to define it”, which was referenced to a quantum physicist.