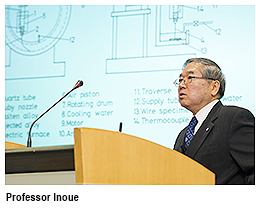 Professor Akihisa Inoue, Special Adviser to the Chancellor and Director of the International Institute of Green Materials at Josai University Educational Corporation in Japan, gave a talk titled “Development and Applications of Bulk Glassy Alloys” on 9 October as part of the on-going City University Distinguished Lecture Series at City University of Hong Kong (CityU).
He introduced the history of the development of bulk glassy alloys, their alloy systems and alloy components, structure, atomic configurations and glass-forming ability. He also took the packed audience through the related production techniques and processes, fundamental properties and thermal stability.
“For thousands of years, metallic alloys have been among the most important materials used by mankind, and their importance as engineering materials remains as great now as ever,” he said.
The high stability of metallic super-cooled liquid had opened up new fields of investigation in basic science and yielded new engineering applications, he added. 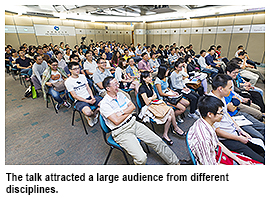 In his welcoming address, Professor Way Kuo, University President, said CityU
was very proud to host the speaker’s visit to campus, pointing out that while CityU had the number two engineering programme in Asia, Tohoku University where Professor Inoue was President from 2006 to 2012 was number one.
In his introductory address, Professor Horace Ip Ho-shing, Acting Vice-President (Research & Technology) said Professor Inoue was a pioneer in his field. Recognised as the inventor of a new class of bulk glassy alloys, he was the most cited academic in his field in 1996 and 2006 according to the Institute for Scientific Information.
Professor Inoue received his PhD in Materials Science and Engineering from Tohoku University in 1975. In addition to his current positions at Josai University, he is also Overseas Fellow at Churchill College, Cambridge University; Emeritus Professor at Tohoku University, Japan; and a Member of the Japan Academy.