Five distinguished persons were conferred the title of Honorary Fellow of City University of Hong Kong (CityU) in recognition of their distinctive contributions to the development of, and service to, the University and the community.

The distinguished persons are: 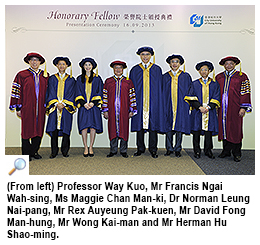 In his welcoming address, Mr Hu thanked the Honorary Fellows on behalf of the University for their unstinting support and wise counsel.

“CityU continues to make remarkable progress in terms of teaching and research in higher education. In the past few months alone, we have seen a great deal of media coverage for CityU projects that have a clear and direct benefit to society,” Mr Hu said. “We have put significant resources into internationalisation because it is extremely important for young people to have an international vision and the opportunity to go overseas during their studies at CityU. We expect even more growth this year in the number of our students going overseas.”

Mr David Fong addressed the assembly on behalf of the Honorary Fellows. “In the past 29 years, CityU has devoted itself to developing Hong Kong’s human capital. It places strong emphasis on nurturing well-rounded graduates who are competent professionals, critical thinkers and life-long learners, equipped to cope in a globalised work environment, and positioned to capitalise on our extensive links to mainland China. The world recognises that CityU is heading in the right direction. For instance, in 2013, CityU was ranked 5th in the QS Survey of the World’s Top 50 Universities under 50 Years of Age,” he said.