Professor Way Kuo of City University of Hong Kong (CityU) has become the first local university president to review the Joint Passing-out Parade held by the Hong Kong Auxiliary Police Force (HKAPF).
Amid pouring rain on 24 August, he took the salute of 274 auxiliary police (AP) trainees who had passed out from two training courses: 153 were undergraduates from 14 local universities and tertiary institutions who had taken the 320-hour Special Basic Training Course 1/2013; and 121 were serving AP members who had finished their 7-day Annual Continuation Training Composite II. 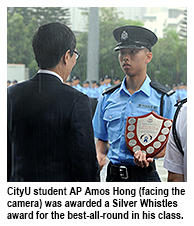 Professor Kuo commended the stamina of the auxiliary police trainees who had weathered the downpour throughout the ceremony, saying that the storm was testing their determination. He urged them to serve the Hong Kong public with pride and care. 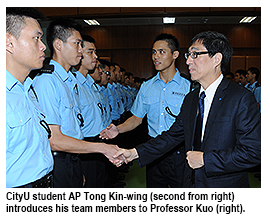 In his capacity as the Reviewing Officer for the ceremony, President Kuo said it was an unforgettable experience for young people to serve the community as auxiliary police volunteers while they were still studying.
“As a man who once served in the marine corps in Taiwan,” he continued, “I know very well how such an experience will be a big plus to a young person’s growth and maturity. It trains one’s discipline and instills a stoic spirit, which turns out to be of great value when pursuing one’s study and research.
“Therefore, I can say with certainty that the special training course you have undergone will prove to be enormously advantageous in the cultivation of a sound personality and successful career.”
He later shared with trainees that many of the Fortune 500 CEOs had received similar training. 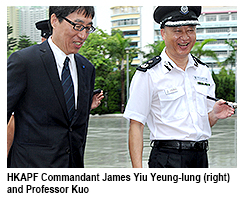 Professor Kuo was joined at the parade by Mr James Yiu Yeung-lung, Commandant of HKAPF, Mr Edwin Lam Man-wing, Assistant Commissioner of Police (SUP), and about 900 family members of the trainees and representatives from local institutions.
Around 4,000 auxiliary police volunteers serve the Hong Kong public alongside 28,000 regular police. The HKAPF began in 1914 when 29 Hong Kong citizens volunteered to assist regular police officers in maintaining law and order.
The Auxiliary Undergraduate Scheme (AUS) was first implemented in 2003 with a view to enhancing the image of regular and auxiliary police services and providing a chance for qualified undergraduates to volunteer their services as auxiliary police.
Currently, about 1,000 volunteering undergraduates serve in the auxiliary police force.