We won the top prize in “Hallo Deutschland” (Hello Germany), an open competition organised by the Goethe-Institut for German language students in Hong Kong. 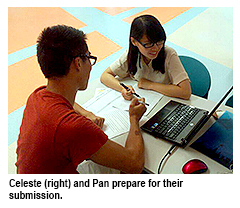 To win, we had to provide a teaching plan for a lesson on German culture targeting local secondary and primary school students. The plan had to focus on two topics, namely Germany as a country of literature and Germany as a country of sports.
Our proposal is a concise two-page plan. We proposed using Grimm’s fairy tales and the “German Fairy Tale Route”, a concept which connects the places and landscapes found in Grimm’s fairy tales, to arouse students’ interest in German literature. We also proposed using Germany’s winter sports and football culture to start the topic of “Country of Sports”. We felt the content could highlight the essence of German culture, while capturing the interest of local Hong Kong students. 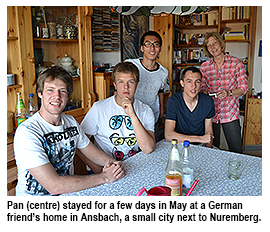 Winning “Hallo Deutschland” was not easy at all. We didn’t know where to begin as the competition guidelines allowed any kind of presentation. Besides, we are only minoring in German, and the preparation period in May coincided with our final examinations.
But thanks to the course “Culture and Society in German-Speaking Countries” and our instructor, Mr Thomas Spitzer, we are equipped with a lot of knowledge about German culture. We adopted Grimm's fairy tales, one of the topics mentioned by Mr Spitzer in class, to build the framework of our competition material.

In the end, our determination has carried us through the process. It was a big surprise for us when we got the results. This is how an unexpected reward comes from never-ending effort.
The prize includes free return flight tickets, accommodation, a visit to Wolfsburg and Berlin, and a reception at the German Foreign Office. We will represent Hong Kong in Göttingen, Germany in November and meet with competition winners from South Korea, mainland China, Mongolia and Japan.
In addition, we will be acting as “Language Ambassador” for the Goethe-Institut. Our responsibility is to promote German language and culture in local primary and secondary schools.