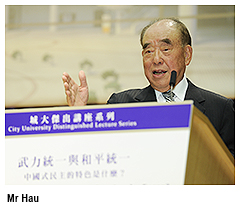 Chinese-style democracy could lead Chinese people down the road of freedom, democracy, peace and equal prosperity, according to Mr Hau Pei-tsun, former Premier of Executive Yuan of Taiwan, in his lecture at City University of Hong Kong (CityU) on 19 July.
In a CityU Distinguished Lecture titled “Peaceful Unification or Unification by Force? The Characteristics of Chinese-style Democracy,” Mr Hau reviewed the history of China’s eight-year war with Japan and the circumstances affecting both sides of the Taiwan Straits since the end of World War Two. 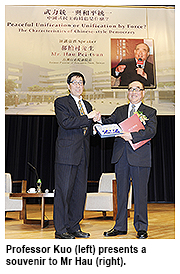 Among the views that he expressed to a full-house audience at Academic 3 were his thoughts on the Kuomintang government’s fundamental policy against the Japanese invasion, the critical strategies for battling with Japan, victory in World War Two, the reform of Taiwan’s democracy, and the development of relationships between Taiwan and the mainland, among others.
Mr Hau pointed out that the year 1941 marked the most significant changes in China’s internal administration and foreign policy during World War Two. It was the last year that the Kuomintang government would battle alone against Japan and the first year that the US and Britain joined with China to fight Japan. 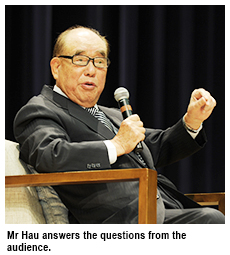 “The war between China and Japan showed that a weaker, less-developed country could win a final victory against a stronger, more advanced nation. This actual fact of history should be known to all people,” he added.
“I wish that the leaders of the younger generation could use their political wisdom to forge a peaceful relationship between the two sides of the Straits. Chinese people should live together in a unified and modernised nation. The age of unification by force is over and the time for peaceful unification will ultimately come,” he said.
Mr Hau, aged 95, experienced the eight years of war against Japan and many other major events during World War Two. He has also served as the Chief Aide to Mr Chiang Kai-shek, President of the Republic of China. In his talk, he cited several paragraphs of Chiang’s diary to help explain the Kuomintang government’s strategies in the fight against Japan. 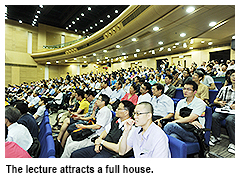 Professor Way Kuo, CityU President, thanked Mr Hau for delivering an insightful lecture on the relationship between the Straits based on his many years of close observation. By referring to many important historical events that he had witnessed and participated in, Mr Hau could enlighten the audience, he said.
Prominent scholars and leaders from various sectors present CityU distinguished lectures to enhance the academic culture on campus and promote the exchange of knowledge for students and staff at the University as well as for Hong Kong citizens.