Beneath the refreshingly off-beat humour, the celebrated scientist imparted a serious message to the capacity audience attending his City University Distinguished Lecture on 23 May.
In his talk titled “Engineering a Better World through Green Chemistry”, Professor Martyn Poliakoff, Research Professor at the University of Nottingham in the UK and Foreign Secretary and Vice-president of the Royal Society, cited four reasons why we need to act quickly and intelligently to safeguard our civilisation.
Human population and consumption cannot be treated as separate entities; the Earth’s capacity for meeting our material needs is finite; emerging developed nations consume more than is sustainable; and millions live in dire poverty, he said.
To square up to these challenges, Professor Poliakoff, known around the world for his inspirational and often irreverent YouTube videos about the periodic table, researches, advocates and promotes green chemistry, i.e. cleaner ways of making chemicals and materials, in particular in his work, creating greener solvents for chemical reactions.
In doing so, he has formulated a broad research question that drives to the heart of the problem of creating a more sustainable lifestyle for the human species, and one that feeds off his close association with Nottingham: his “Robin Hood Question” asks, can we provide more for the poor without robbing the rich? 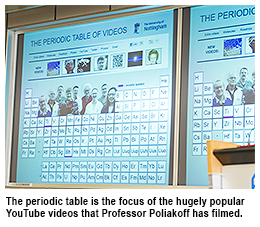 One way to answer this question, he said, was to find ways to make more products from the same amount of available materials; and green chemistry offered scientists a range of opportunities for doing so.
For example, it is no secret that plastic bottles are an ecological problem – used in great quantities, rarely recycled, washed up on beaches and deposited in landfills. An alternative, Professor Poliakoff explained, was to make plastic bottles out of sugar in a process that reduces the amount petroleum byproducts created and can exploit existing supply chains. The economic benefits are obvious: oil is becoming more expensive, so any product that uses petroleum will also increase in price. The environmental ones need little clarification, either: any process that reduces the amount of carbon released into the atmosphere helps.
Professor Poliakoff went on to discuss his championing of green chemistry in Ethiopia where his research looks at creating cleaner and more efficient ways of extracting oil from species of Artemisia plants used in antimalarial drugs.

Assisting in other countries is also the driver behind his concept of Cloud Chemistry. Professor Poliakoff said that it is possible for researchers outside of the UK to use the state-of-the-art reactors where he works at the University of Nottingham, which has campuses in China and Malaysia. Researchers can remotely control the reactors and obtain the analyses that they need without having to own and operate the hardware in their home country or host institution.
“Cloud chemistry allows greater access and empowers green chemists,” he said.
One of the ironies of green chemistry, though, is that the buildings that house laboratories for chemistry are often energy-intensive, and so another challenge is to create lab workplaces that are more efficient. At Nottingham, Professor Poliakoff explained, a new eco-friendly chemistry building was in the pipeline in conjunction with the British pharmaceutical healthcare company GlaxoSmithKline. The building would be constructed using more wood than concrete, as concrete is a carbon-heavy material, and would use wool from nearby sheep farms to insulate walls to combat the chilly English climate, thus cutting down heating bills.
In terms of quick fixes, in response to a question raised by Professor Arthur Ellis, Provost of CityU, during the Q&A session after the talk, any chemistry lab would be greener if computers were switched off overnight and fume cupboards made more efficient, the speaker said.
Professor Poliakoff ended by thanking Professor István T Horváth, Head and Chair Professor of CityU’s Department of Biology and Chemistry, whom he referred to as the “father of green chemistry”, and by pointing out the alignments between CityU’s Discovery-enriched Curriculum and a new MSc in Green and Sustainable Chemistry to be launched at the University of Nottingham in 2013–2014.
“We also encourage our students to ‘discover’ something new,” he said.