Hong Kong kids tend to be significantly more narcissistic than their counterparts in Western countries, with parenting styles, i.e. “monster parents” or “helicopter parents” identified as a contributing factor, according to a recent study at City University of Hong Kong (CityU). 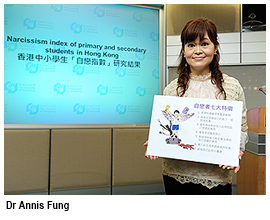 The study, which was conducted by Dr Annis Fung Lai-chu, Associate Professor of CityU’s Department of Applied Social Studies, used a narcissism index to assess 9,432 Primary 3 to Form 5 students at 13 schools in different regions around Hong Kong.
According to the index, Hong Kong students are more narcissistic (M=3.89) compared with comparable studies in the US (M=2.90), Australia (M=2.81) and the UK (M=2.36). Another significant finding is that the mean scores of narcissism among adolescent offenders in the US (M=6.90) and Canada (M=5.93) are similar or even lower than the mean scores of narcissism in adolescents with proactive aggression in Hong Kong (M=6.23).
Furthermore, the data suggests that students from high-income families (total monthly family income HK$30,000 or above) are more narcissistic, whereas students from low-income families (total monthly family income less than HK$10,000), such as those receiving Comprehensive Social Security Assistance, appear to have no narcissistic personality traits.
The findings also show that narcissism significantly correlates to parenting style, with authoritarian and permissive parenting styles correlating significantly to narcissism among proactive aggressors. These are the so-called “monster parents” and “helicopter parents” respectively discussed in Hong Kong nowadays. 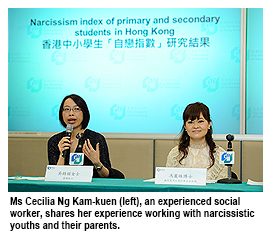 Dr Fung said that generally children in Hong Kong tend to be over-served at home because families are smaller than in previous generations and many families hire domestic helpers. Subsequently, children perceived themselves to be important, powerful, and dominant in the family, deserving of anything they want, she said.
“Parents do not expect their children to do things around the home but instead have higher expectations about academic achievements and other rewards. Children would then try to achieve what they want to achieve at any expense,” explained Dr Fung.
The study also found that corporal punishment encourages proactively aggressive children to consider aggression as the most effective way to reach goals, and in turn makes them more narcissistic.
In fact, according to Dr Fung, the study shows the extent to which narcissism is closely related to proactive aggression, i.e. aggressive behaviour is not driven by frustration, hostility or perception of threat, but rather that it is a way to obtain instrumental goals (e.g. money, materials, power).
“Proactive aggressors are very intelligent, calm, and confident. It should be noted that delinquent behaviour among proactive aggressors is usually deliberate and highly organised,” she said. “Indeed, there are close links between proactive aggressors and psychopathy, and psychopaths are more likely to commit homicide, such as the Tsui Po-ko case.”
Dr Fung pointed out that this research had proved that an authoritative, as opposed to authoritarian, parenting style is more conducive to the development of children’s personality and the parent-child relationship, and helps to suppress narcissism.
According to Dr Fung, authoritative parents listen to their children; allow them to express opinions; place limits, consequences and expectations on children’s behaviour; administer fair and consistent discipline when children break the rules; develop children’s reasoning and introspective abilities; encourage independence based on children’s different development stages; and evaluate and enjoy the process with children instead of just focusing on outcomes.
“Parents should focus more on developing children’s ethics and empathy so that they would appreciate and respect others, and understand the needs and feelings of others,” she said. “Parents should also instill in their children a pleasurable sense of helping others.”
The study adopted the Antisocial Process Screening Device which invited parents to assess their children’s behaviour in seven areas using a 3-point scale. “0” means the sentence is “not at all true” to describe their children; “1” means “sometimes true” and “2” means “definitely true”. The seven items are: emotions seem shallow; brags excessively; uses or “cons” others; teases others; acts charming in ways that seem insincere; becomes angry when corrected; and regards himself/herself to be more important than others. Scores totaling more than 3 points indicate that the children tend to be more narcissistic, and parents should be more aware of their behaviour. Total scores higher than 8 are defined as narcissism in psychopathy and parents may seek help from social workers at schools or call the “Youthline” (Tel: 2777 8899) administered by the Hong Kong Federation of Youth Groups.

Project on young people at risk extended to primary schools