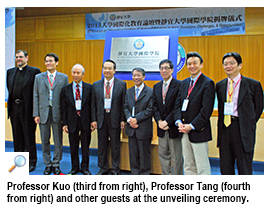 Professor Way Kuo, President of City University of Hong Kong (CityU), was invited by Providence University in Taiwan to unveil its international college on 10 April.
Coinciding with the event was a talk delivered by Professor Kuo titled “The Role of Language in Internationalisation”. Taking the modernisation of South Korea and Japan, as well as the success stories of Chinese and foreign celebrities as examples, Professor Kuo said in the talk that English played an important role in enhancing communication and promoting understanding in an internationalised environment. Nevertheless, like any other language, English was only a tool for exchange and communication, he said.

When it comes to internationalisation in education, more emphasis should be given to the content and state of mind, Professor Kuo said, adding that vision, courage and dedication were also key elements. He pointed out that to achieve international standards in academic and scientific research, we needed to move 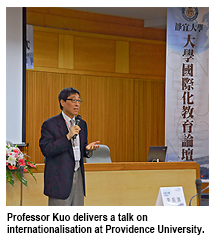 with the times, be able to predict future trends, and conduct research according to one’s own characteristics and problems encountered.
In addition, Professor Kuo said the world was watching what we do in a globalised environment, so our research must align with international standards. Merely looking at language ability was a narrow and short-sighted means to achieve that, he argued.
During his visit, Professor Kuo also met with Professor Tang Chuan-yi and Professor Chou Wen-kuang, President and Vice-President of Providence University respectively, as well as Professor Lee Bing-jean, Vice-President of Feng Chia University.