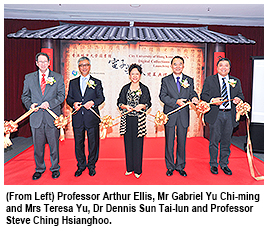 The Run Run Shaw Library of City University of Hong Kong (CityU) held the opening ceremony for the launching of the Digital Collections cum Rare Book Exhibition on 26 February. More than 300,000 pages of digitised documents are now accessible on the Library’s website while a portion of the original rare works is on display at the Library until 31 March, showcasing CityU’s contributions to the preservation of rare books and documents and its efforts in the transmission of cultural heritage.
Distinguished guests officiated at the opening ceremony, including Dr Dennis Sun Tai-lun; Mr Gabriel Yu Chi-ming and Mrs Teresa Yu; CityU’s Provost Professor Arthur Ellis; CityU’s Librarian Professor Steve Ching Hsianghoo. Dr Sun and Mr Yu are both members of the Court and Honorary Fellows of CityU. While Dr Sun has donated more than 1,000 Chinese stitched bound books to the Library, Mr and Mrs Yu have offered to the Library 50,000 items of rare contemporary and modern Chinese books, journals and documents. 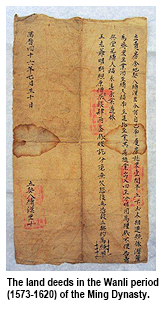 “The launch of the Digital Collections marks a milestone in our history. It signifies that our collections can be shared by all people in the world, and both modern and classical works can be saved for the research needs of future generations. This is also in line with CityU’s objective of Discovery-enriched Curriculum, and that is, to stimulate students to create new knowledge and share it with others for the well-being of society,” Professor Ellis said in his welcoming address at the ceremony. 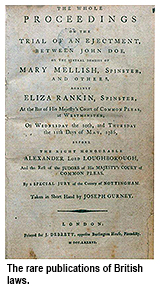 The materials preserved by the digitisation project can be broadly divided into eight categories: a special collection on Chinese rare books, a special collection on English law, items published during the Republican period of China (1911-1949), books and journals published in the early years of Hong Kong, rare manuscripts and letters, movie posters and flyers, black-and-white photos taken in the Chinese Cultural Revolution period, and land deeds. The digitised materials are made accessible on the university Library’s website http://www.cityu.edu.hk/lib/digitalcollections/ to CityU staff and students. Materials that have no copyright restrictions will be made available to the public as well.
CityU’s English law special collection is one of the best of its kind in Asia. With 761 items in 1,807 volumes, the core of the collection is made up of rare English law materials published before 1900. Among them, the 1,371 volumes of rare books acquired from Mr Victor Tunkel, a private collector of English law books, are an important resource for studies in English legal history, the Anglo-American legal culture and the Commonwealth legal history. 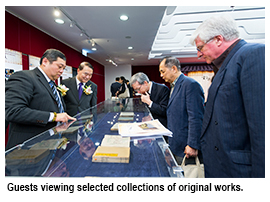 Professor Ching said CityU Library launched the “Pilot Digitalization Project” in 2012 to restore and digitise by stages part of its special collections. The success of the Digital Collections project is attributable to the support of the colleagues of the Library and various sectors in society. In the future, CityU will expand its project and, will, in collaboration with libraries and organisations in Hong Kong and elsewhere, restore, preserve and promote modern and classical books and documents, so as to provide a large volume of valuable data and materials for researchers now and of later generations.
After the ceremony, Professor Chen Kuang-hua, Deputy Director of National Taiwan University Library, delivered a talk titled “Digital Archives Development in National Taiwan University”. Mr Robert Miller, Global Director of Books at the non-profit organisation Internet Archive, also hosted a talk on 27 February to discuss the role of internet archives in digitisation.