​On 12 January, a ceremony was held at CityU Shenzhen Research Institute to mark the launch of the Shenzhen MArine Research and Technology Consortium (SMART). Initiated by the Shenzhen Virtual University Park, the Consortium was established by the State Key Laboratory in Marine Pollution (SKLMP) of City University of Hong Kong (CityU) together with 11 prominent universities and research institutes. 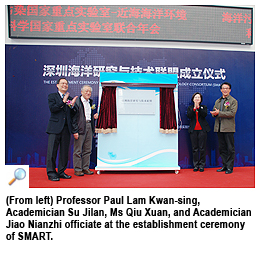 Member institutes of SMART include Tsinghua University, Shenzhen Institutes of Advanced Technology of the Chinese Academy of Sciences, Xiamen University, Shenzhen University, and Peking University.
More than 200 guests and representatives from member institutes of SMART, government departments, academic institutes and enterprises attended the ceremony. Guests of honour included Academician Su Jilan from the Second Institute of Oceanography of the State Oceanic Administration; Academician Hu Dunxin from the Institute of Oceanology of the Chinese Academy of Sciences; Academician Jiao Nianzhi from the College of Oceanography and Earth Sciences at Xiamen University; Mr Ren Jianguo, Director of Division IV (marine science and polar science) of the Department of Earth Sciences of the National Natural Science Foundation of China; Ms Qiu Xuan, Vice-Director of the Science, Technology and Innovation Committee of Shenzhen Municipality; Professor Lu Jian, Dean of CityU’s College of Science and Engineering; Professor Cheng Shuk-han, Director of CityU’s Office of Education Development and Gateway Education; Professor Donald Anderson from Woods Hole Oceanographic Institution (WHOI) of the USA; Professor George Iwama, President of University of Northern British Columbia in Canada; Professor John Giesy, Fellow of the Royal Society of Canada; and Ms Molly Kung, Executive Director of Chinachem Group in Hong Kong. 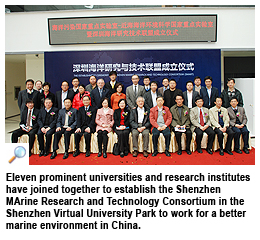 The Consortium will focus on marine science studies, with the objective of promoting innovative development in related fields. Professor Paul Lam Kwan-sing, a major initiator of SMART as well as CityU Vice-President (Student Affairs) and Director of SKLMP, said, “I’m delighted that the model of SKLMP has been adopted as a blueprint for the formation of SMART. It means the model of consolidating resources and talent of marine science from various institutes can be expanded by SMART. A much more powerful synergy can be formed to lay a solid foundation for innovative research and development of marine science in China."
“We hope to encourage research and self-initiated, innovative studies on marine science technology through a synergy of universities and research institutes. The research will consider the safety and protection of ecology and sustainable development of marine resources in Shenzhen waters in response to the needs of society. We aim to develop Shenzhen into a model city in China that has advanced technology and capability to develop marine resources for economic advancement and protection of marine environment.”
Covering 1,145 square kilometres, the waters around Shenzhen are about half the size of the city’s land area. According to a survey, among some 400 species of marine creatures identified, more than 50 are categorized as resources for the local fishery industry. There are three major industries in Shenzhen waters – marine transportation, coastal tourism and marine gas production – which contribute 10% of the total GDP of the city. To foster the development of the marine economy promoted by Shenzhen municipality, the newly-established SMART will provide expertise and professional support to related industries.
Academician Su and Professor Lam have been appointed as the Director-General and Deputy Director-General of SMART respectively. Members of the Academic Advisory Committee include Academician Su, Academician Ni Jiazuan, Academician Lin Haoren and other academicians.
Professor Lam said, “I have the highest regard for Academician Su’s significant contributions to marine science in China. He has pointed out that Shenzhen has a geographical advantage for deep sea research. Through SMART, he hopes to promote research on marine science, boost related industries, and develop the expertise of marine scientists in Shenzhen. The goal is to gradually establish Shenzhen as an important base of deep sea research in China in the future. Deep sea research not only has significant meanings to the development of marine science in China, but also represents a dream of a lifetime to Academician Su.”