Syrian-born Professor Aziz Al-Azmeh from the Department of Medieval Studies at Central European University in Budapest delivered a lecture titled “Classical Arabic Civilisation” at City University of Hong Kong (CityU) on 19 December. His talk was the first in the Introduction to World Civilisations lecture series. 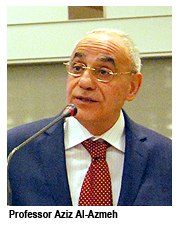 The lecture series is organised by the Department of Chinese, Translation and Linguistics (CTL) at CityU and is designed to enhance appreciation of cultural diversity and different civilisations. Renowned academics from all over the world will speak at the lectures.
During his lecture, Professor Al-Azmeh highlighted the political, social, economic, religious and cultural features of Arabic civilisation from the 7th to 12th centuries. He started by defining the terminology of his lecture title. Classical refers to a historical moment instead of a tool against which other periods are contrasted. Arabic refers to the area stretching from Spain to the border of China where the Arabic language was the linguistic medium of cultural, scientific and administrative expression. He referred to sociologist Marcel Mauss, who suggested that civilisation might best be regarded as a hyper-social system rather than an analytical tool.
He went on to say the Arab empires that spread classical Arabic civilisation came into their own in the later stages of Late Antiquity and were characterised by imperial systems with global ambitions and ancient pedigrees. Wars and conflicts were the result of the objective striving for an ecumenical, geopolitical unity under a single authority and a large-scale political, monetary and commercial system that served economic needs. From Spain in the west to Iran and even the border of Tibet in the east, the Umayyad and Abbasid caliphates were the most prominent representatives of this civilisation. The architecture of the Umayyad caliphate, such as the Dome of the Rock and the Umayyad Mosque in Damascus, became the blueprints of Muslim architecture. 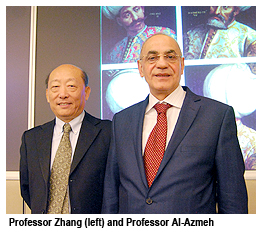 Professor Al-Azmeh also explained the economic system that sustained the Arab empires. He mentioned an interesting story – that of the famous mathematician, astronomer and geographer Al-Khwarizmi and his decision to treat zero as a number, which was as important in mathematics as the invention of the wheel in Neolithic times. The decision of the Abbasid caliph Al-Ma’mun, after reputedly seeing Aristotle in a dream, to establish the House of Wisdom and the resulting Great Translation Movement was a testimony to the relationship between classical Arabic civilisation and European civilisation. Professor Al-Azmeh further described classical Arabic civilisation’s contributions to various fields of natural science, such as astronomy, alchemy and pharmacology.
In his conclusion, Professor Al-Azmeh pointed out that the Arabic language was at that time not only the language of Muslims and the Arab world, but also the liturgical and scholarly language of Christianity and Judaism. Moreover, Muslim orthodoxy came into its own only after the Crusader assaults, which subsequently caused the decline of cosmopolitanism and rationalism.
In addition to the lecture series, CityU will launch a Gateway Education course so that undergraduate students can gain a holistic view of the diversity of world civilisations, according to Professor Zhang Longxi, Chair Professor of Comparative Literature and Translation at CTL. Professor Zhang mentioned that given rising global interconnectivity, students must acquire a broad knowledge base in order to face the challenges of the 21st century.
The Introduction to World Civilisations lecture series consists of 12 lectures on the origins of civilisation, including the civilisations of Europe, pre-Colombian America, Africa, Central Asia, India and more. Details will be announced in due course.