City University of Hong Kong (CityU) organised a delegation to compete in the 2012 Fubon Taipei Marathon on 16 December, the first among Hong Kong universities to do so, and its first alumni cultural exchange activity in Taiwan. These “ice-breaking” outreach activities were supported by the Eminence Society, a distinguished alumni group, and led by Mr Herman Hu Shao-ming, Council Chairman. 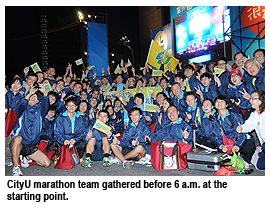 The CityU team was composed of 82 students, staff and alumni, who either ran the full marathon (42 km), half marathon (21 km), or the 9-km race. Professor Way Kuo, President of CityU, ran the 9-km race. The runners had been selected by CityU’s Taipei Marathon Organisation Committee, comprising representatives of the Student Development Services, the Alumni Relations Office, the Campus Development and Facilities Office, and the Department of Management. Some of the runners had represented CityU in the past few years’ Standard Chartered Hong Kong Marathon with excellent records.
Professor Kuo noted that competing in the Taipei Marathon was part of CityU’s efforts in carrying out its Five-Year Strategic Plan, as it helped to create a global image for the University, bring its alumni closer together, and enhance the unity and harmony among the CityU community. He said that he had a dream that, with the support of alumni, the CityU Marathon Delegation could compete next year in Beijing, and in Seoul, Tokyo, London and Washington DC in the future.
Mrs Dorothy Davies Wong Ka-yiu, Associate Director of the Student Development Services and Chair of the Organisation Committee, noted that CityU was the first in Hong Kong to have a strong university-level team run the Taipei Marathon on such a big scale, though its students had joined other enthusiastic Hong Kong joggers in that same event before, through the organisation by CityU’s Physical Education Section.
CityU’s participation this year is expected to foster the team spirit among students and staff and encourage them to go in for sports and exercise, she said. 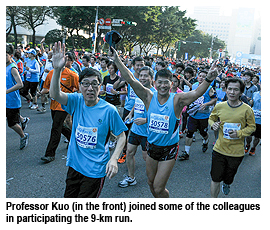 In order to make this event a great success, the Alumni Relations Office did a lot of work, especially in soliciting donations. Ms Kathy Chan Yin-ling, Associate Vice-President (Alumni Relations) and Adviser to the Organisation Committee, said, “We’re honoured to have warm-hearted alumni who made generous donations in support of this particular event. These activities helped to make CityU better known to Taiwan communities.”
Distinguished alumni, Mr Andrew Fan Ka-fai, President of the Greater China Region at Nu Skin Enterprises Inc., Dr Peter Ho Ka-nam, Managing Director of Techworld Industries Limited, and Mr Simon Hui Hing-tak, Chief Executive Officer, E.P.S.A. Corporation Ltd., helped with the coordination of cultural exchange activities in Taiwan which lasted four days prior the Marathon. The exchange delegation paid visits to Dr Lung Ying-tai, Minister of Culture of Taiwan, and Dr Lien Chan, Honorary Chairman of Kuomintang and Honorary Doctor of CityU. They attended two forums where Dr Stan Shih, founder of the Acer Group, and Mr Rober Wu Qing-yu, founder and chairman of Eslite Group, made speeches respectively. Eight Taiwan CityU alumni participated in some of the cultural exchange activities.
Over 45,000 runners competed in this year’s Taipei Marathon according to the organiser. In addition to the full marathon, half marathon and 9-km run for adults, about 5,000 kids joined the 2-km or 3-km Fun Run.
11 CtyU runners won awards in their age groups, including No 1 in women's half marathon (Ms Poon Hoi-lam, alumna), No 3 in women's full marathon (Ms Lau Wai-han, alumna; Ms Titania Li Ka-wing, staff) and in women's 9-km run (Ms Chan Sin-hung, student), respectively.