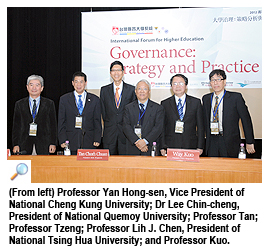 Times have changed. It is important that universities in Hong Kong and Taiwan should have a niche. They have to adapt by holding everyone accountable for what they do. These were the key messages of a keynote speech by Professor Way Kuo, President of City University of Hong Kong, at the 2012 International Forum for Higher Education – Governance: Strategy and Practice, held in Taipei on 12 December.
The accountability canons must apply to all, from the presidents, deans and department heads to professors, staff and even students, Professor Kuo said. “While the teachers are held accountable for the insights they provide, students are held accountable for adapting themselves to the needs of the modern world.”
He emphasised that accountability is not just a buzzword. It is an operating principle based on performance and judged by results.
“Teaching evaluation is a way of accountability, the same as research, to evaluate the performance of a teacher,” said Professor Kuo, “Though it was not introduced as early in Asia as in the US, it is beginning to spread and the criteria used for judging teaching staff are changing as well. For example, showmanship used to be considered a good trait; now it’s more about quality of content. It is not perfect, but at least it serves as one reference.” 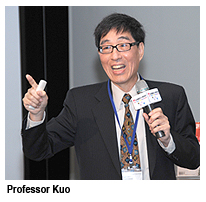 He recalled what he found out from an extensive study on teaching evaluation. “When it was first introduced in the US, it was not popular either. But nowadays about 80% of the teachers buy the idea, with 20% still holding some doubt about its effectiveness.”
Refuting the commonly held belief that research affects teaching adversely, Professor Kuo said he strongly believed that teaching and research are two integral parts of a professor’s role. “They reinforce each other,” he added. “Why be a professor if you don’t teach? At the same time, what do you teach if you don’t do research? Many professors and courses are no longer relevant, especially if a student does not learn anything beyond what is contained in the textbook.”
Citing free online courses offered by such distinguished universities as MIT, Professor Kuo suggested that universities should teach what is required for a modern society to flourish. He mentioned three popular lectures at Harvard. “Though they are big classes with up to 700 students, the size of the class doesn’t stop the students from discussing and interacting with the professors,” he said, “because they are teaching more than what the students learn from the books.”
In terms of internationalisation, Professor Kuo said it is all about adopting the best practices. In many respects, Asian universities could look for guidance to the US, where the top universities have excelled over the past 60 years with their flexible education system, diversified, free and competitive academic environment, academic talents from all over the world, culture of accountability and a strong donation culture.
These are the essential points he elaborated in a contribution to a December supplement of the Harvard Business Review (Taiwan) specifically produced for the forum, entitled “What should universities in Hong Kong and Taiwan do under internationalisation?”.
Professor Kuo’s comments were echoed by the insightful presentation by Professor Tan Chorh-chuan, President of the National University of Singapore (NUS), which has gone through a 10-year corporatisation process.
“While there is no ‘one-size-fits-all’ solution, good governance is crucial,” Professor Tan said. “For NUS, self-governance plus sustained government support has been critical for our progress.” He detailed the challenges and actions taken during the process as NUS developed from a statutory body to a not-for-profit company, which can be summarised as introducing an enhanced accountability framework, and competitive, flexible and performance-based human resources practices.

The higher education forum was organised by the University System of Taiwan (UST) in collaboration with the Harvard Business Review (Taiwan). Dr Chiang Wei-ling, Minister of Education in Taiwan, addressed the audience and Professor Ovid Tzeng Jyh-lang, Chancellor of UST, delivered an opening speech.
Attending the forum were more than 200 top management personnel, faculty and other university staff from around Taiwan, including from the four UST universities, i.e. National Central University, National Chiao Tung University, National Tsing Hua University and National Yang-Ming University.