The City University of Hong Kong (CityU) Court, at its meeting on 6 December, was briefed on the University’s latest developments and its achievements in 2012.
Dr Norman Leung Nai-pang, Pro-Chancellor, who chaired the meeting, warmly welcomed Mr Herman Hu Shao-ming, who was appointed as Council Chairman on 1 October. Dr Leung remarked that under Mr Hu’s able leadership and guidance, the University will reach new heights in the future. 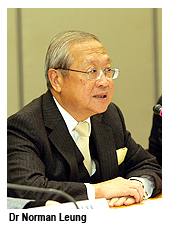 In his opening remarks, Dr Leung noted that the University continues to flourish under the capable leadership of the Council and the University President, Professor Way Kuo. CityU’s achievements in global rankings as well as the accolades won by its faculty and students in international competitions are evidence that CityU has made significant progress, Dr Leung said. CityU is ranked 12th in Asia and 95th in the world according to the QS rankings in 2012.
Dr Leung registered a vote of thanks to Mr David Sun Tak-kei, who took up the Council chairmanship in April for three months, and also thanked Mr Raymond Or Ching-fai, the Deputy Council Chairman, who took up the acting chairmanship on two occasions over the last year.
“We are blessed to have the strong support of so many enthusiastic members of the community,” Dr Leung said.
Mr Hu reported to the Court that the University had prepared well for the four-year undergraduate curriculum. New buildings, such as CityU (Shenzhen) Research Institute Building, Run Run Shaw Creative Media Centre and Academic 2 are in operation, and Academic 3 is scheduled to be completed in early 2013. In addition, the Council has supported the University’s proposal to apply to the University Grants Committee (UGC) for the development of the student hostel phase 5 in Ma On Shan which will help relieve the shortage of student residence with the provision of more than two thousand bedplaces. 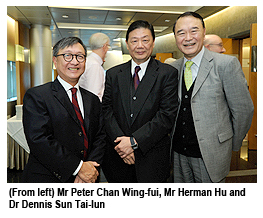 Staff-related policies such as the Sexual Harassment Policy and Procedures and the provision of paternity leave were approved by the Council to enhance the University’s ability to retain and motivate staff members, Mr Hu said. He added that the Council has just approved the salary increase under the Performance-based Pay Review Scheme (PBPR).The Council will continue to monitor the progress and commission a critical review of the Scheme with a view to enhancing its role in performance management and reward.
Mr Hu also reported on the progress of the establishment of the School of Veterinary Medicine. He said the School will be launched next year and will admit the first batch of students in 2014-15. The Council endorsed the revised proposal for re-submission to the UGC to seek government funding. Mr Hu also mentioned that the Council earlier this year approved the re-appointment of Professor Kuo for another term as the President.
Mr Hu informed Court members of the four priority areas he identified to which he would devote special effort and attention. They are: student development and student welfare, welfare of staff and harmonious relationship among the CityU community, engaging alumni, and building positive image and reputation of the University.
“I will devote time and effort in improving the above priority areas and I welcome advice from the Court in further advancing the University,” he said.
Mr Hu concluded his report with an audio-visual presentation to keep the Court members abreast of CityU’s accomplishments in 2012. 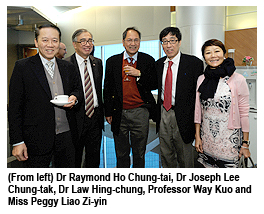 Professor Kuo, in his report to the Court, said students are CityU’s top priority and the first principle in the University’s five-year strategic plan. He reported the progress of the implementation of the Discovery-enriched Curriculum that was launched in the current academic year under the theme “Discover and Innovate” to strengthen integration of learning and research in our professional education.
To enhance the University’s global engagement efforts, Professor Kuo said that a target of $50 million has been set for a fund to give students an opportunity to study at a university overseas or in the mainland for a semester during their four years at CityU. The University has established partnerships with prestigious overseas institutions such as the University of York, the University of Cambridge, the Tohoku University and the Saint Petersburg State University. Overseas applications to CityU have increased by 29% and the University has welcomed more international students this year to enhance campus globalisation, he said.