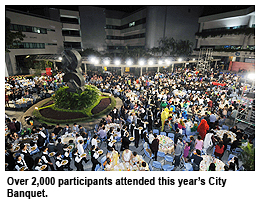 Over 2,000 Council members, staff, alumni and students participated in this year’s joyous City Banquet on 2 November at City University of Hong Kong (CityU) under the theme “Family Reunion”.
Officiating guests included Mr Herman Hu Shao-ming, the newly appointed Council Chairman, Professor Way Kuo, University President, and Ms Karmen Chan Ka-man, Chairman of the Convocation.
In his opening remarks, Mr Hu said we should never forget the importance of family, and he praised the Students’ Union for choosing to feature a sentimental attachment to the University, not just because “a harmonious family makes everything prosper” but also because socialising and soft communication skills are particularly important in this unprecedented era of advanced technology. 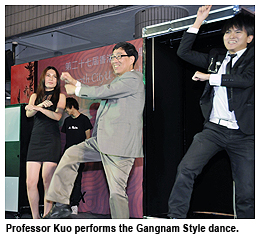 Professor Kuo said in his address that Mr Hu’s talk had reminded him of stories about “giving time to time”. Citing the invention of can openers several years after the emergence of canned food, and the decision of US businessman Ross Perot not to invest in Steve Jobs’ earlier version of the iPhone, Professor Kuo remarked that “we should not only do the things right, but we also have to do the right things”.
“CityU has been doing the right things over the years. Our future will be bright,” he added.
At this annual signature event, students dressed in spooky costumes—paper-packed beverages, Sesame Street characters, Native American Indians, superheroes, bananas, Teletubbies and other animated characters—to name but a few. Eleven teams competed in the “Oh My Banquet Style” contest with the Sesame Street team taking home the gold prize.

Highlights of the delightful evening included the magical appearance of Professor Kuo from a big box during a performance by the Magic Society, followed by his amusing rendition of the Gangnam Style dance routine, earning him a big round of applause. The Dancing Society and Accapella by Viva Music added to the joy and excitement.

Once again the banquet supported the “Zero Food Waste in CityU” campaign, which is part of the University’s social responsibilities programme. The number of banquet courses was reduced from eight to six per table to minimise waste. Over 99% of the tables undertook the commitment this year, saving on a significant amount of food.