In search of a Land of Happiness 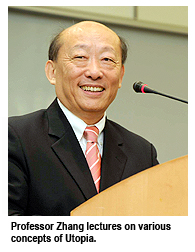 The eleventh in a series of specially commissioned lectures celebrating academic excellence at City University of Hong Kong (CityU) reviewed a universal human desire, namely the pursuit of happiness.
Entitled “In Search of a Land of Happiness: Utopia and Its Discontents”, the lecture delivered on 9 October by Professor Zhang Longxi, Chair Professor of Comparative Literature and Translation in the Department of Chinese, Translation and Linguistics, guided an interdisciplinary audience of academics and students through a gallery of writings and discussions of utopia or utopias over the centuries, in the West and in China.
Starting from Thomas More, who coined the very word of utopia, various thinkers and fiction writers in the Renaissance and the Reformation periods down to modern times elaborated on the concept so extensively that many scholars regard utopia as uniquely European, existing only in Western societies mostly dominated by religious systems of thought featuring a deeply-rooted biblical theme of evil in human nature.
And that’s where Professor Zhang raised his opinion. While Krishan Kumar, a modern Western scholar, understands utopia as essentially secular, “what we need to do is to extend that insight beyond the scope of modern Europe”, Professor Zhang argued. Under the influence of Confucianism, he explained, the Chinese cultural tradition has been largely secular from the very beginning and deeply ethical in its belief in an innately good human nature, quoting Confucius and Mencius, the latter ranking only second to Confucius in the tradition. 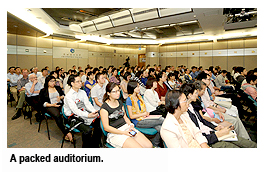 Then Professor Zhang discussed in detail an exemplary utopian piece in classical Chinese literature, The Peach Blossom Spring by the great poet Tao Yuanming (365–427), which appeared more than a thousand years before Thomas More’s Utopia (1516). The story told by Tao showed a positive view of human nature and a strong desire for a land of happiness, or an ideal society. A poem by Tao on the same topic further described this land as a tranquil agrarian society where people led a simple but happy life.
China’s tradition of utopian writings carried on to modern times. Kang Youwei (1858–1927), for example, wrote Da Tong Shu, or The Book of Great Unity, which expressed his political philosophy about a perfect society, Professor Zhang added.
Professor Zhang went on to discuss utopian writings in Islamic culture, and explain how “utopia’s cousin—or alter ego—the dystopia” evolved and how dystopia as a literary genre (for example, We by Yevgeny Zamyatin, Brave New World by Aldous Huxley, and Nineteen Eighty-four by George Orwell), in the 20th century particularly, came to flourish while utopian literary writings declined.
Yet Professor Zhang remains optimistic. “We should perhaps encourage the writing of [utopian] fiction, the imagining of a more persuasive utopia, a more tangible land of happiness,” he concluded. 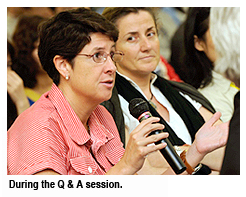 The moderator of the event, Professor Kingsley Bolton, Acting Dean of the College of Liberal Arts and Social Sciences and Chair Professor of English, introduced Professor Zhang as a leading scholar in East-West cross-cultural studies who has published widely in the field of humanistic studies, with a focus on promoting understanding between China and the West.
The lecture was followed by a Q&A session with lively interaction between the speaker and the academics, guests and students packing the spacious auditorium.
​