Internationalisation of higher education means more than improving a student’s ability to speak English, according to the President of City University of Hong Kong (CityU) in a recent lecture. Rather, the focus should fall on developing more substantial ideas in a conversation, knowing more about the culture of one’s native country, and enhancing one’s personal qualities. 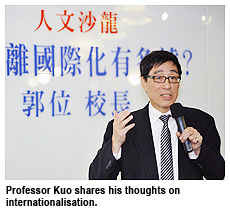 Professor Way Kuo drew on his 30 years’ experience working and living in the US as a researcher, educator and administrator during his talk at the Humanities Saloon Lecture, which was jointly organised by the Kwang Hwa Information and Culture Center and the Asia Pacific Taiwan Federation of Industry & Commerce on 7 September.
In his talk “How Far Are We from Internationalisation?”, Professor Kuo said some people felt that learning English was the primary means of achieving internationalisation, which is a prevailing trend today among global higher education institutions and in Hong Kong.
“We should note that language is only a communication tool,” he said. “The ideas and standpoints presented are more important. Concrete ideas do not need flowery language.” 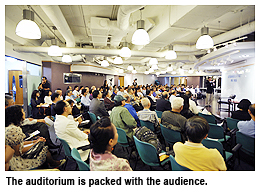 He added: “Many eminent Chinese scholars in the US do not speak particularly fluent English yet they are highly respected for their ideas. Also, Confucius was a native of Shangdong and it was not easy for others to understand his local accent. However, there are no records that suggest people in different parts of China had problems understanding what he was saying about philosophy.”
It is the cultural content embodied in language that people usually find more appealing, he said, which is why people should know more about their own culture if they wish to truly internationalise.
“Chinese people should have a deeper understanding of, and work hard to enhance, the quality of their culture. Internationalisation should be built on a solid foundation of one’s own culture,” Professor Kuo said. In addition, we should develop a down-to-earth spirit and fact-oriented practice.
Internationalisation among local higher education institutions also means complying with international standards such as integrating research with teaching to enhance the knowledge of both teachers and students. 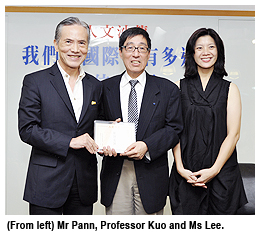 “To professors in the US, teaching is part of the job. At the same time, they understand the importance of research in order to keep them abreast with the ever-changing technologies and the latest developments in society. Thus, internationalisation requires emphasis on the integration of teaching and research,” Professor Kuo said.
He suggested teachers should make the most of class time to inspire students and offer them guidelines to learn rather than simply imparting knowledge that students could learn by themselves.
Professor Kuo’s lecture was hosted by Ms Lee Ying-ping, Director of the Kwang Hwa Information and Culture Center, and Mr Alexander Pann Hantang, Chairman of the Asia Pacific Taiwan Federation of Industry & Commerce. More than 150 participants attended the lecture, including Professor Zhang Longxi, Chair Professor in CityU’s Department of Chinese, Translation and Linguistics, and Professor Cheng Pei-kai, Director of CityU’s Chinese Civilisation Centre.
​