​
Container ports in China will maintain steady growth in 2012 despite a global slowdown of container throughput due to the downturn of both the global economy and international trade, according to a container traffic forecast recently announced by City University of Hong Kong (CityU).
CityU’s Centre for Transport, Trade and Financial Studies (CTTFS) and the Center for Forecasting Science of the Chinese Academy of Sciences released the report findings at a press conference in Beijing on 21 June. The report is a joint effort by the two centres. 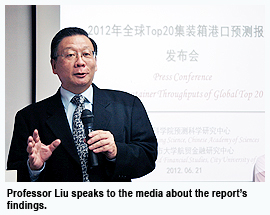 According to the report “Outlook of Container Throughput at Global Top 20 Ports in 2012”, China will account for half of the top 20 container ports with the highest container throughput. Shanghai is expected to be the busiest port in the world, to be followed by Singapore and Hong Kong. The Dalian port, which ranks 17th, is expected to have the highest annual growth rate of all, at 24%.
Professor John Liu Jianhua, Director of CTTFS, said the report predicts that growth for the major Chinese ports is expected to go from rapid to moderate in the years to come. “The Chinese government should formulate a competitive, sustainable strategy and master plan for overall port development,” he said.
Container transport forecasts are a widely used reference for strategic planning for shipping industries and government policy, he added.

CTTFS is an inter-college research center at CityU that promotes research and education in maritime, aviation, trade and financial studies.