The need for changes to the cultural fabric of Hong Kong was the topic of a talk by the President of City University of Hong Kong (CityU) at the Hospital Authority Convention 2012 on 8 May.

Professor Way Kuo was addressing an audience of more than 400 health professionals and administrators from Hong Kong, mainland China and overseas at the annual two-day programme under the theme “EnHAncing Health”. The aim of the event was to exchange knowledge and experience about enhancing health care and other professional services.

In his talk, Professor Kuo said enhancing effectiveness, quality and safety in health care services often meant creating a culture of accountability. “Only when everyone is accountable for what he or she is doing can we ensure quality,” he said.

He compared the difficulties of changing an existing culture to rolling a boulder uphill. “Changing the culture means breaking away from the comfort zone and challenging the status quo. Therefore resistance is expected. We need to consolidate everyone’s efforts in order to succeed,” he said.

Universities in Hong Kong could learn a great deal from the Korea Advanced Institute of Science and Technology (KAIST), the well-respected institution in Daejeon, south of Seoul. KAIST is a great university, without the word “university” in it. Professor Suh Nam-pyo, president of KAIST realised early on after taking up his position that unless KAIST changed its outlook, it would not be preparing its students for the global world of work.

His plans were probably not that popular with many senior professors at KAIST, and no doubt there was resistance. But, in a globalised world, where your actions are heard, seen and evaluated beyond your borders, he anticipated the urgent need for change at a deep structural, societal and cultural level.

The reforms that Professor Suh initiated include devolving administrative power to departments. Like other Confucian heritage societies, South Korea places a great deal of emphasis on seniority, but Professor Suh felt that unless seniority was earned, some academic departments would grow stale. Merit should be rewarded and seniority earned, he reasoned, not granted on age alone. 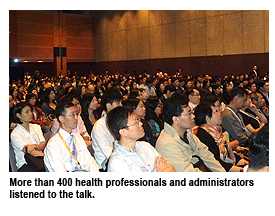 Professor Kuo further developed his point with reference to the development of the mobile phone industry. “Nokia used to be the top-selling mobile phone less than 10 years ago,” he said. “With the introduction of smart phones, however, we first saw Apple’s iPhone dominating the market, even though Nokia still makes one of the best phones and was ahead of Apple in the concept of smart phones by 10 years. Samsung, on the other hand, overtook Apple in smart phone sales in the first quarter of this year.”

The world is changing around us, Professor Kuo said. “If we don’t change with the times and keep updating ourselves, we will be watching the world pass us by.”