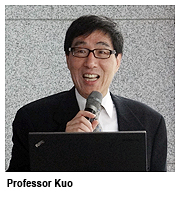 a luncheon organised by the Lions Club of Metropolitan Hong Kong on 7 May.

Professor Way Kuo outlined the pros and cons of all the major energy sources and explained how countries turned to nuclear energy in the 1970s in the wake of that era’s energy crisis.

A year after the Fukushima nuclear accident, the world has had time to reflect on nuclear energy’s place against a spectrum of energies, he said. While extreme natural disasters triggered the accident, human error aggravated the situation. The lessons learned would help enhance the safety of nuclear power, he added. 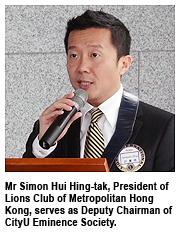 He reiterated that three factors—resources, reliability and sustainability, and economic growth—had to be factored into any discussion.

Even though some countries had decided to give it up, Professor Kuo was certain that nuclear energy would be a reliable energy source for a long time to come. Countries would continue to depend on such energy and should understand the paradigms and issues involved in modern nuclear energies, he said, adding that it was essential to update knowledge through problem-driven research. 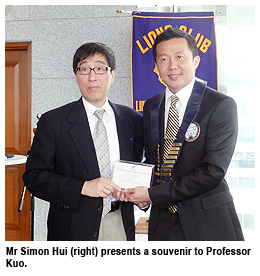 Professor Kuo concluded by calling on people to conserve energy and avoid squandering natural resources, while scientists and governments needed to continue to develop renewable energies, he added.

At the end of his talk, he introduced his two most recent books, A Spectrum of Energies—Reflections on Japan's Earthquake, Tsunami and Nuclear Accident and Importance Measures in Reliability, Risk, and Optimization—Principles and Application. The Lions Club placed an order for 50 copies of one of Professor Kuo's books following his talk, royalties from which will be donated to student scholarships at CityU.