Safety management and emergency responses to a serious nuclear accident were the focus of a symposium co-organised by the Nuclear Division of the Hong Kong Institution of Engineers (HKIE) and the Department of Mechanical and Biomedical Engineering at City University of Hong Kong (CityU) on 24 April. 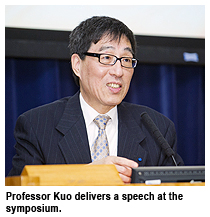 In his talk titled “Risk Identification through Mathematical Modeling”, Professor Kuo discussed how importance measures were used in probability risk assessment and probability safety assessment as well as in fault diagnosis and maintenance policy.

It was equally important to carry out risk assessment and sensitivity analysis at the nuclear plant and identify critical elements, he said, for example, the “loss of coolant” which happened in the Fukushima Dai-ichi Nuclear Plant after the earthquake in March 2011 in Japan. 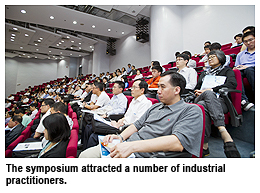 Mr Wong said the Hong Kong government had conducted a comprehensive review of the Daya Bay Contingency Plan (DBCP) following the nuclear accident in Fukushima last year to ensure that it continues to provide adequate protection to the people of Hong Kong.

The Hong Kong Observatory had stepped up its radiation monitoring and assessment activities during the Fukushima nuclear accident, according to Mr Ma in his talk. He was reporting the findings of a preliminary study conducted by the Observatory using computer simulations and weather analysis on the transportation of radioactive substances arising from the accident to Hong Kong.

Under the DBCP, the Water Supplies Department and the Centre for Food Safety are responsible for ensuring potable water supplies remain safe and carrying out ingestion counter measures in the event of an accident. In the event of water imported from Guangdong becoming contaminated, Dr Lam said his department would carry out emergency monitoring of water in reservoirs, catchment areas, industrial and residential areas.

Mr Mo introduced the DBCP measures that the Centre would use to control imported food and live food animals, safeguard food safety and protect public health in Hong Kong.

To cater to the growing need for nuclear professionals in the region, CityU would set up Hong Kong’s first-ever nuclear and risk engineering undergraduate programme later this year, said Dr Luk Bing-lam, Senior Engineer of CityU’s Department of Mechanical and Biomedical Engineering and Chairman of the Nuclear Division of HKIE.