The black and white geometric design used to premise a talk on cultural relevance in international communication research gave the packed audience an instant insight into the speaker’s main position. 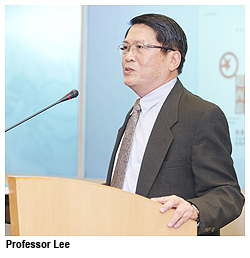 The Taoist taijitu visually rendered his Yin/Yang theory of international communication, according to Professor Lee Chin-chuan, Chair Professor and Head of the Department of Media and Communication, speaking at the President's Lecture Series: Excellence in Academia on 2 March.

This concept was developed in the lecture with Professor Lee calling for a rejection of both the dominant view in international communication theory, held by the likes of the American political scientists Francis Fukuyama and Samuel Huntington, and nativistic views enshrined with Asian values and a Confucian ethos.

Instead, he urged greater cross-cultural learning. “Mutual borrowing is both necessary and healthy if it is done with critical choice and, above all, without losing one’s firm cultural grips,” said Professor Lee, an expert in global communication, the political economy of the media, and social theories of media studies.

To encourage greater understanding among people from different cultures and to promote plurality and peace, it was essential that we moved away from both Western-cum-universal hegemony and its polar opposite, essentialised theories of Asian media and so-called Chinese exceptionalism, he argued.

“The study of Chinese media is by no means intellectually self-sufficient or isolated,” Professor Lee said. “It should interpenetrate with the theoretical and methodological advances in international communication and in the larger currents of humanities and social sciences.”

General theoretical perspectives with Chinese characteristics, based on local cultural influences, should ultimately develop into a broader view of how the world works, he argued. 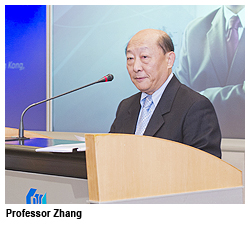 “If we succeed in establishing these kinds of general perspectives that allow for internal differences, speak with a distinctive cultural accent, and yet transcend theoretical parochialism, we will be in a strengthened position to maintain an open-minded and mutually enriching dialogue with the Western literature on an equal footing,” he said.

The talk was introduced by Professor Zhang Longxi, Chair Professor of Comparative Literature and Translation in the Department of Chinese, Translation and Linguistics. The talk by Professor Lee was the ninth in the on-going President's Lecture Series.