A pioneering information day launched in Shanghai by City University of Hong Kong (CityU) drew a packed-house of more than 300 high school teachers, students and their parents from Shanghai and the neighbouring provinces of Jiangsu and Zhejiang. 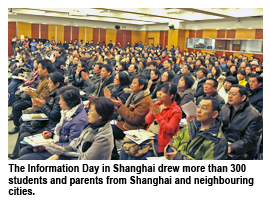 The event on February 18 was the first large-scale enrollment campaign ever conducted in the mainland by any higher education institution in Hong Kong. It was organised by CityU’s Mainland and External Affairs Office (MEAO) together with CityU’s Liaison Office in Shanghai.

The aim was to showcase CityU’s professional education, its cutting-edge academic disciplines under the new 4-year curriculum, its research achievements, its internationalised faculty, and its advanced teaching methodologies.

Scholars from CityU’s various colleges and schools, and the Chow Yei Ching School of Graduate Studies offered advice on enrollment for graduate and undergraduate programmes at formal and informal discussions with mainland students and their parents. 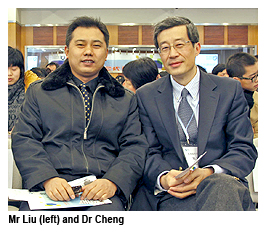 Staff from MEAO undertook a comprehensive promotion campaign for the Information Day. They mailed posters and invitations to key high schools in Shanghai, Zhejiang and Jiangsu; sent invitations to the offices of Hong Kong, Macau and Taiwan Affairs of all the major universities in the region; put up posters in student residence halls, academic buildings and the main campus paths in these universities; and posted enrollment information on the websites of the universities concerned.

A day before the Information Day, Dr David Cheng Xing, Associate Vice-President for Mainland and External Affairs, invited the principals of 16 key high schools in Shanghai to an informal meeting and thanked longtime partners for their continued support. Mr Liu Yuxiang, Deputy Director of the Shanghai Municipal Educational Examinations Authority, attended the event, offering his endorsement.

A CityU alumna, Ms Evian Zhu Yiyun, a design consultant who returned to Shanghai after graduating from the School of Creative Media last year, shared with the audience her own learning experience at CityU. “My life at CityU exposed me to an international standard of education and made me more independent,” said Ms Zhu, praising in addition the newly opened Run Run Shaw Creative Media Centre for its unique design and advanced multi-media facilities. 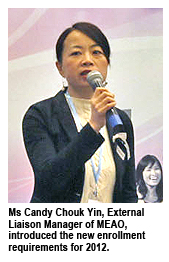 CityU attaches great importance to the enrollment of bright students from the mainland. Since 2004, the University has participated in the China International Education Exhibition Tour sponsored by the Chinese Service Center for Scholarly Exchange under the Ministry of Education, achieving remarkable success each time.

In the past few years, our growing academic strength, outstanding faculty and rising international reputation have helped boost the number of students from the mainland applying to CityU.

“This year’s Information Day is our first attempt at promoting CityU by ourselves,” said Dr Cheng. “On the one hand, we can focus on promoting CityU and building our brand image; on the other, CityU’s scholars can provide high school students and their parents with face-to-face consultations.”

CityU’s liaison office in Shanghai, which was set up early last year, made organising the Information Day possible.

Talks at the event included “The policy for the enrollment of undergraduate students and its implementation rules and regulations”, “On the way to graduate studies at CityU”, “Innovation and pursuit of knowledge: a globalised university in Hong Kong”, “The ABC of CityU’s business administration programme”, “Cultivating a new-generation of professionals in science and engineering”, “Exploring the creative media”, and “Challenges in the new century: energy resources and environment”.

The 30-some participating faculty and staff members from different colleges and schools said they were encouraged by the high attendance. “The Information Day was focused, efficient and effective in promoting our programmes,” said Ms Alice Wong Yuet-yau, School Secretary of School of Energy and Environment.

“Although our school is offering undergraduate programmes for the first time, we have already received many enquiries. We should perhaps hold similar activities in other major cities,” she said.

Parents from Nanjing and Hangzhou agreed that CityU should host similar activities in Jiangsu and Zhejiang provinces.