The renowned physicist and Nobel Laureate Professor Claude Cohen-Tannoudji gave a lecture at City University of Hong Kong (CityU) on major breakthroughs in the evolution of atomic physics during the last few decades on 13 January as part of the France-Hong Kong Distinguished Lecture series.

“Professor Cohen-Tannoudji is Honorary Professor of Atomic and Molecular Physics at the Collège de France and was awarded the Nobel Prize in Physics in 1997 for the development of methods to cool and trap atoms using laser light,” Professor Ellis said.

“He has shown creativity, innovation and determination that is fully emblematic of what we at CityU are hoping to inspire our students to do when we officially launch the Discovery-enriched curriculum this fall,” he added.

At the beginning of his lecture, titled “Advances in Atomic Physics from Optical Pumping to Quantum Gases”, Professor Cohen-Tannoudji presented a comprehensive overview of the significant advances made in atomic physics from 1950 to 2010, such as the development of optical pumping methods first proposed 60 years ago, the availability of laser sources 50 years ago, the invention of new methods, such as laser cooling and trapping, evaporative cooling, and Feshbach resonances. 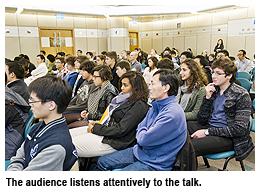 Professor Cohen-Tannoudji played a major role in these developments. His research into radiative forces on atoms in laser light fields, laser cooling and trapping has had a deep impact on many aspects of physics, enabling researchers to observe atoms for a longer period of time, increasing considerably the precision of many different kinds of measurements and helping to better understand the interaction of radiation with matter.

“The possibility to achieve ultra-cold gaseous samples of strongly interacting atoms and to control all experimental parameters allows one to explore new physical situations, to realise simple models of more complex quantum systems found in other fields of physics, and to get a better understanding of their behaviour,” he explained.

His contributions and achievements have won him many awards, medals and prizes, including the Gold Medal from the French National Center of Scientific Research, the Research Award from the Alexander von Humboldt Foundation, and the Harvey Prize in Science and Technology from the Technion Israël Institute of Technology. 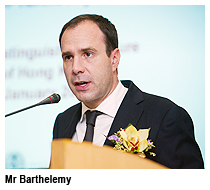 Mr Arnaud Barthelemy, Consul General of France in Hong Kong, thanked CityU for co-organising the France-Hong Kong Distinguished Lecture series. “France and Hong Kong have a long and fruitful partnership in research and higher education, and CityU is the cornerstone of this booming higher education cooperation,” he said.This lecture series is co-organised by the French Academy of Sciences, the Consulate General of France in Hong Kong, and CityU.