An evening in honour of the 2011 Nobel Laureate in Literature 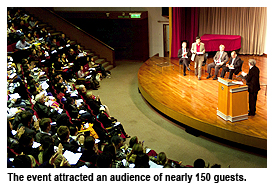 Nearly 150 guests gathered at City University of Hong Kong (CityU) on 12 December to appreciate the work of Mr Tomas Tranströmer, the 2011 Nobel Laureate in Literature.

Mr Tranströmer is Sweden’s most renowned contemporary poet. His poetry has been translated into some 60 languages, and he has gained a following among many readers around the world, not least among other poets.

Four distinguished guests and a CityU Chair Professor took part in the event “An Evening in Honour of Tomas Tranströmer: The 2011 Nobel Laureate in Literature”. 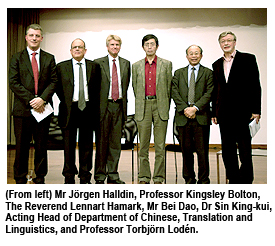 Mr Bei Dao, the distinguished Chinese poet and Tranströmer’s first Chinese translator, read his own translations of Tranströmer’s work and shared his personal impressions of the poet and his work. The Reverend Lennart Hamark from the Church of Sweden in China and Hong Kong read some of Tranströmer’s poetry in the Swedish original, while Professor Kingsley Bolton, Chair Professor of English and Acting Dean of the College of Liberal Arts and Social Sciences at CityU, read English translations.

The Swedish Consul General in Hong Kong, Mr Jörgen Halldin, talked about the significance of the Nobel Prize on the world academic and cultural stage. Professor Torbjörn Lodén from Stockholm University discussed the importance of Tomas Tranströmer and his contribution to poetry.

The event was co-organised by the Consulate General of Sweden, Hong Kong, and CityU’s Department of English and Department of Chinese, Translation and Linguistics.