Professor Way Kuo, President of City University of Hong Kong and a member of the US National Academy of Engineering, delivered the opening speech at the annual European Safety and Reliability (ESREL) conference, which this year was held in Troyes, France. In attendance were around 900 professionals from Europe and around the world. 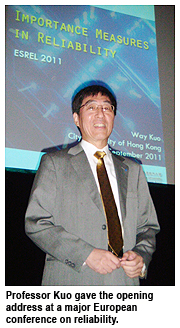 His talk, titled “Importance Measures in Reliability”, follows the nuclear disaster at the Fukushima I Nuclear Power Plant in Japan after it was hit by a tsunami in March and the explosion at a French nuclear plant at Marcoule in September.

Although there were no radiation leaks after the French blast, which was caused by a fire near a furnace in a radioactive waste storage site, questions have been raised once more about the reliability of nuclear power plants.

In his talk, which took place on 19 September, Professor Kuo, who has published extensively in the area of reliability, discussed the enhancement of the principles for system reliability, suggesting the need for a coherent system that defines the “deterministic functional relationship between system and its components”.

He said: “[Such a] relationship is useful for finding the reliability of large and complex systems.”

Professor Kuo is the first academic invited by the European Safety and Reliability Association to deliver a talk on nuclear reliability following the Fukushima nuclear incident.

He has spoken widely on safety issues related to the nuclear industry since March 2011. He gave a talk on reliability of nuclear power system at Tohoku University and the University of Electronic Science and Technology of China in Chengdu, Sichuan Province. He also delivered a wide-ranging topical talk on the reliability and survivability of nuclear energy and the future of energy in general at the Hong Kong Convention and Exhibition Centre in August.

In addition, he has been invited to talk about the future development of energy to 1,000 students and staff at Chung Chi College at The Chinese University of Hong Kong this week and in Jerusalem later this year.