The President of City University of Hong Kong (CityU) delivered a wide-ranging topical talk on the reliability and survivability of nuclear energy and the future of energy in general at the Hong Kong Convention and Exhibition Centre on 30 August 2011.

The seminar, organised by the Tsinghua Alumni Association of Hong Kong (TAAHK), was part of the centennial celebrations for Tsinghua University. Mr Li Jialin, Chairman of TAAHK, introduced the speaker, while Mr Geng Chunya, Chairman and CEO of EastSpider and alumnus of both Tshinghua and CityU, presided over the seminar. 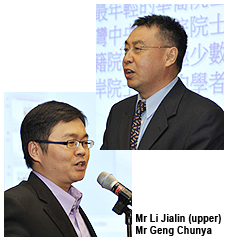 While nuclear power is a clean energy source and statistically safer than power plants using fossil fuels, hydraulics, natural gas and other energy sources, the incident at the Fukushima No. 1 nuclear power plant in Japan had understandably triggered fresh concerns and even caused panic regarding the safety of nuclear energy, Professor Kuo explained.

But he urged a rational approach. “When we look at energy, we have to balance three factors, namely resources, reliability and sustainability, and economic growth. We have to be sensible, rather than be swayed by illogical fears or politics,” Professor Kuo said, citing the results of a recent survey carried out in Taiwan in which 60% of respondents attributed the loss of tens of thousands lives in Japan after the earthquake and tsunami on 11 March to the nuclear accident at Fukushima nuclear power plant.

People’s fears were understandable because, as Professor Kuo said, few things in life are 100% safe.

“Varying degrees of unreliability and uncertainty are contained in everything. So is it with nuclear energy,” he said.

However, the chance of a major disaster in the nuclear power industry is slim compared to that with other energy sources, he said.

Professor Kuo held that energy is no longer a luxury but a problematic necessity in modern life. While coal is the most commonly used fossil fuel in many countries, it creates numerous environmental hazards and casualties. In China alone, more than 2,400 coal miners died in 2010 in work-related incidents, while pollution from coal kills an estimated 200,000 people every year worldwide. 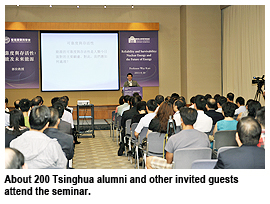 As for water power, although it is one of the cleanest of the planet’s energy sources, it is not reliable, as we have seen with the drought earlier this year in southern China, not to mention the ecological consequences of damming rivers.

Other energy sources are also problematic, he argued. “Let us look at another popular energy source: biofuels,” Professor Kuo said. “According to the Earth Policy Institute, in 2010, 40% of America’s corn harvest, enough to feed at least 350 million people, was used to manufacture ethanol, an increase from 6% in 2000, a development that has aggravated food shortages.”

Professor Kuo said that even though nuclear energy was not perfect, people had to face reality. “New energy ideas require investment. It is human nature to advocate new energy sources, including wind turbines and dams as long as it will not require one’s own sacrifice, as illustrated by the so-called ‘not in my backyard’, or NIMBY, syndrome.”

Professor Kuo concluded by proposing solutions for the future development and use of energy, which can be summed up as “paying for risk prevention”:

· Variable pricing for electricity based on distance from power supplier and energy sources;

· Portions of electricity charges used for energy research and development;

Professor Kuo delivered a similar talk at the Hong Kong Book Fair earlier in the year and is contributing a series of articles to the Hong Kong Economic Journal that reflects upon his visit to the earthquake-stricken area in Japan only a month after the disaster.