A City University of Hong Kong (CityU) survey on online payment security has revealed that Hong Kong netizens have a relatively low awareness of personal information protection in the online world, potentially exposing them to hackers. 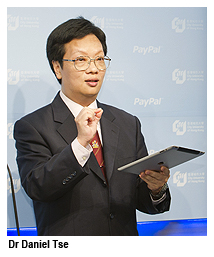 The survey aims to understand how the growing popularity of digital lifestyles, online group-buying and smartphone usage in Hong Kong is increasing the risks associated with sharing personal data online.

Designed and conducted by CityU in conjunction with PayPal Hong Kong, the survey showed that despite 38% of respondents being concerned about sharing personal information online, seven out of 10 people polled use the same password with an average number of seven online accounts. This is alarming as once a cyber-criminal has access to the password for one online account, he could quickly build up a profile of personally identifiable information for theft.

Moreover, six out of 10 people surveyed report that they never update their online passwords, or only do so when required. Using a strong online password and frequently updating it are simple but effective security practices to stop hackers accessing personal details or conducting online fraud. 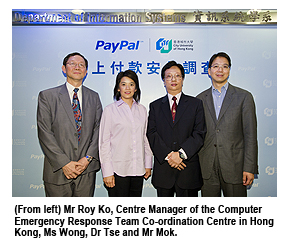 The survey also reveals that over 75% of respondents regularly make payments online at least once a month for online shopping and bill payments. But despite the increasingly common use of the internet for payments, 78% of respondents state that security is a concern that discourages them from using online payments more often.

In addition, as smartphone adoption rates continue to grow in Hong Kong, over 67% of respondents say they would choose to use their mobile phones and devices to make payments because of convenience, efficiency, and the ability to make transactions “anytime, anywhere”. But at the same time, only 20% of people agree that using a mobile phone to make payments is secure and 40% said they would only use mobile payment for small transaction amounts such as buying coffee or a movie ticket. Only one in eight people would be willing to use mobile payment for purchases exceeding HK$500.

“Despite rising fears of hacking and online attacks, most people do not act in response to change their risky online habits,” said Dr Daniel Tse Woon-kwan, Instructor I of CityU’s Department of Information Systems. “The proportion of risky behaviour such as using the same password for multiple accounts runs unexpectedly high across respondents of all levels of education and income levels, an indicator of the widespread issue of online vulnerability.”

Ms Kerry Wong, General Manager of PayPal Hong Kong and Taiwan, said people are still reluctant to increase their use of online payment methods mainly because they don’t know how to protect themselves and their private information online.

The “Online Payment Security Survey” was conducted online during two weeks in August 2011. More than 1,200 responses were collected from Hong Kong netizens aged 18 or above. Approximately, 75% of respondents are in the 22 to 39 age group. Over 50% have a university degree and the average income of the respondents is HKD$15,000 per month.