The Council Chairman, six current and former Council members, a Court member, an academic staff and six alumni of City University of Hong Kong (CityU) have been recognised in this year’s Hong Kong Special Administrative Region Chief Executive Honours List or appointed as Justices of the Peace. 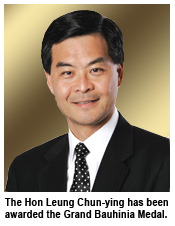 Council Chairman The Hon Leung Chun-ying is one of two recipients of the Grand Bauhinia Medal this year for his long and distinguished public service, particularly his contributions to the smooth transition of sovereignty in Hong Kong and his exemplary efforts promoting the implementation of “One Country, Two Systems”. As the Convenor of the Non-Official Members of the Executive Council, Mr Leung assists the Chief Executive in the governance of Hong Kong by providing valuable advice on policy-making.

CityU is proud to have Mr Leung as Council Chairman and has benefited from his vision for higher education since he was appointed to the position in 2008. 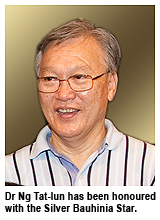 The late alumnus Mr Fu Cheuk-yan has been posthumously awarded the Medal for Bravery in recognition of the utmost bravery he displayed in the hostage incident in Manila, Philippines. Mr Fu sacrificed his life trying to protect others, demonstrating exceptional courage.

Alumnus Dr Ng Tat-lun has been honoured with the Silver Bauhinia Star for his contributions to the promotion of innovation and technology as well as manpower training and development in Hong Kong. 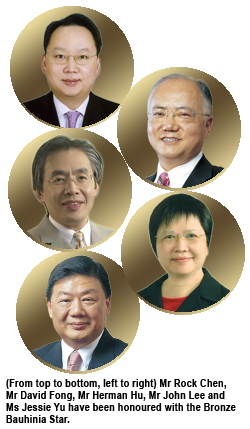 Four current and former Court and Council members and an alumna have been honoured with the Bronze Bauhinia Star (BBS) for their meritorious public and community service. Court member Mr Rock Chen Chung-nin is honoured for his community service, particularly his contributions to promoting youth development and civic education. Mr David Fong Man-hung has been commended for his contributions to socio-economic development, education and social services in Hong Kong. He has served on CityU’s Council since 2007. Mr Herman Hu Shao-ming has been recognised for his contributions to the promotion and development of sport in Hong Kong. He joined the Council in 2004. Mr John Lee Luen-wai, a former Council member and an honorary fellow of the University, is honoured for his valuable contributions to the Hospital Authority and the governance of Queen Elizabeth Hospital. He was a member of the Council from 1998 to 2007. Alumna Ms Jessie Yu Sau-chu is honoured for promoting the welfare of the underprivileged.

Mr Jonathan Chan Pok-chi, a recipient of the College of Science and Engineering Alumni Achievement Award and one of the 2009 Ten Outstanding Young Persons, has been honoured with the Chief Executive's Commendation for Community Service.

In addition, Ms Shirley Chan Suk-ling and Dr Chiang Lai-wan, current and former members of the Council, Dr Priscilla Leung Mei-fun, Associate Professor in the School of Law, and alumnus Mr Brave Chan Yung have been appointed as Justices of the Peace.