“A man’s career is first and prime, Too late to sorrow for a making of slip of time. Aspiration does not call for a three-foot sword, A genius tries his hand at song of thousands words.” 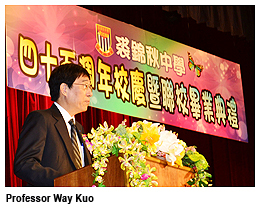 Professor Way Kuo said the above four lines were from Li’s poem entitled A Self Account at Twenty, composed in his adolescence, when he was about the same age as the graduating students.

Professor Kuo explained that Li was aware that he was in his heyday and time was too precious to be wasted. If he treasured time, there would be no remorse in later days. As long as one had high aspirations, one didn’t have to pursue a military route to success. Civil talent could also lead to accomplishments as one can administer a country and help the people. “Young people of today should aim high and broaden their vision,” Professor Kuo said. 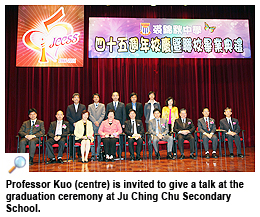 “According to a US survey, an average person changes jobs ten times and changes sectors four times in his/her entire life,” Professor Kuo added. “As such, students should build a strong general education foundation while studying at school so that they can adapt to different jobs in later years.”

Professor Kuo also pointed out that in the highly materialistic society of ours, young people should follow successful people around them as their role models and learn their ways of working. “As long as you cherish your time and set your goals high, one of you may become the future Chief Executive of Hong Kong or one of our country’s leaders someday,” Professor Kuo said.