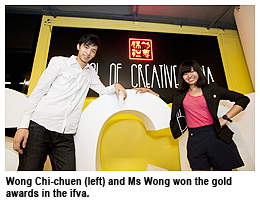 City University of Hong Kong (CityU) has recorded its biggest ever haul of medals at the Hong Kong Independent Short Film and Video Awards (ifva).
Nine graduates and students from the School of Creative Media (SCM) took home eight prizes, including two gold and three silver awards.
Ms Wong Yee-mei, a 2010 SCM graduate, won the Gold Award in the open category with the short film This Pair, and Wong Chi-chuen, a Year 3 SCM student, won the Gold Award in the interactive media category with the multi-media installation 10Hz.
This Pair depicts the conflict between two generations of the same family using anecdotes from Ms Wong’s grandmother in Guangzhou and an argument between her mother and grandmother. Ms Wong said the film was personally very important to her because of the close relationship she has with her grandmother. 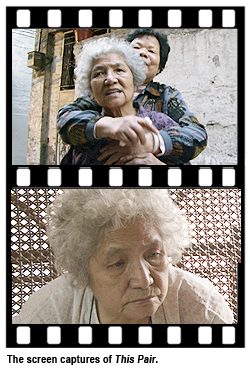 After filming in Guangzhou, Ms Wong’s grandmother was very upset to see her granddaughter return to Hong Kong. “My grandma is often criticised by her children and their relationship is deteriorating. That’s why I wish to dedicate this film to my relatives, hoping they can reflect on their relationship with my grandma,” she said.
The multi-media installation 10Hz stimulates the audience with sight and sound. After the audience enters the installation, more than two dozen vibrating tuning forks and other sights and sound generate a series of illusions.
“The sound wave at a frequency of 10Hz is often used in targeted therapies, as it resembles our brain wave frequency where we are relaxed. Through my installation, individuals can enjoy the experience of illusions generated by sound waves,” Chi-chuen said.
Winning the award had a special meaning to Chi-chuen, too. “I like to try different ways to transform my knowledge and imagination into art. To produce this multi-media installation, I worked overnight, compiling computer programmes and studying electronic devices. The award is recognition of my hard work,” he said. 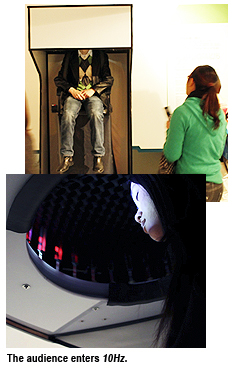 Both winners said they were grateful for the guidance offered by SCM teachers and their enthusiasm. Ms Wong thanked Dr Louisa Wei Shiyu and Mr Patrick Tam Ka-ming, and Chi-chuen expressed his gratitude to Mr Ip Yuk-yiu, Dr Hector Rodriguez, Dr Linda Lai Chiu-han and Mr Samson Young Kar-fai. “I will continue to work hard and not let my teachers down,” Ms Wong said.
Three silver awards in the open, animation and interactive media categories went to Mr Lo Chun-yip, a 2010 graduate, Mr Ho Ka-ho and Ms Tsui Ka-hei, 2009 and 2008 graduates, and Mr Lam Chi-fai, a 2008 graduate, and his friend for their works 21 years after, Puff the Magic Dragon, and Sycamore (dancing poetry), on the street, respectively.
21 years after tells of the difficulties experienced by a secondary school student who takes part in a social campaign. Depicting the Five Constituencies Referendum, the film presents obstacles in democratic development in Hong Kong. “I wish to take up my social responsibility by discussing political issues in my film. Through my films, I hope to encourage my fellow graduates and friends to care about social development,” Mr Lo Chun-yip said.
Puff the Magic Dragon combines different media, such as film, fixed frame images and 2D animation, to describe the chaotic mind of an aimlessly roaming individual. Mr Lam Chi-fai’s multi-media installation, Sycamore (dancing poetry), on the street, allows the audience to use computers to edit texts collected from different streets and roads. By projecting on the floor the verse created by the audience, the installation encourages the audience to consider the ownership of public space.
In addition, the animation Pick Up & Put Down by Ms Lilian Fu Wing-yan, a 2008 graduate, picked up the Special Mention Award in the animation category. blackout by Ms Yuen Sau-ying, a 2010 graduate, and PMV [Personalized Music Video] by Ms Millie Chiu Yuet-yung, a 2009 graduate, won the Special Mention Award and the Best Concept Award, respectively, in the interactive media category.